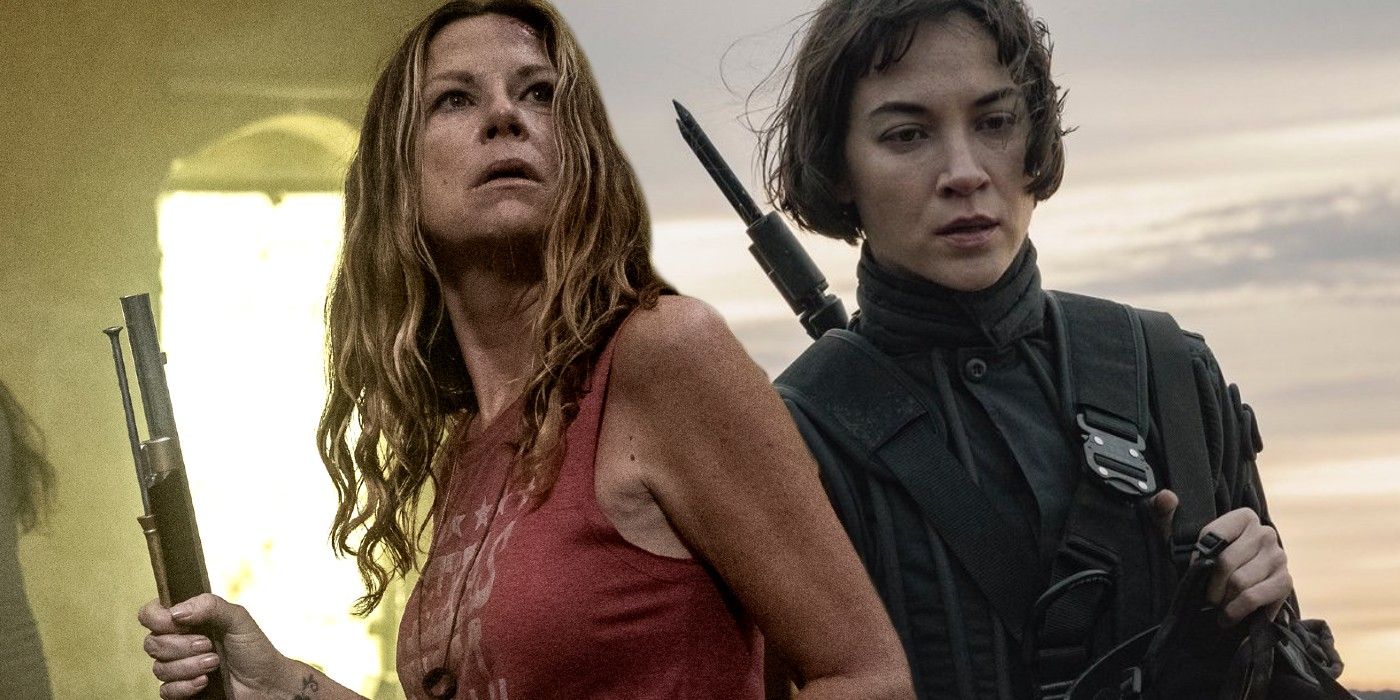 Worry that The Walking Dead is wasting a massive CRM opportunity

Fear the living dead Season 7 seemed certain to build on the franchise’s overall CRM mystery, but “Breathe With Me” eerily slips into the end of Season 6’s helicopter. Aside from a Dwight here and a Jadis there- bottom, the AMC trio Walking Dead The TV shows stay in their separate corners of the zombie apocalypse. The Civic Republic Army, however, represents a rare common thread between the three, snatching Rick Grimes into The walking dead, and currently serving as the main antagonists in The Walking Dead: World Beyond.

Fear the living dead also pulled her weight from the CRM, featuring helicopter pilot Isabelle in Season 5. After killing her partner for jeopardizing the Civic Republic’s super strict code of silence, Isabelle was discovered by Althea, and well that she knew this stranger should be executed on the spot, their romantic spark meant that Isabelle had no choice but to let Al roam free. Fear the living dead Season 6 saw Al resolve to reunite with “Beer Lady”, and fortuitously she did, as pulling some strings meant Daniel’s party could escape Teddy’s nuclear missile in the CRM helicopter. Isabelle.

With a horde of questions still unanswered, the Walking Dead franchise is probably working towards Rick Grimes versus CRM on the big screen. Fear the living dead Season 7 was gearing up to be a part of that journey… but maybe now has changed course.

The bubbling relationship between Al and Isabelle directly anchors Fear the living deadof the protagonist group of CRM, but there is an undercurrent of danger in this dynamic. If her military superiors found out that Isabelle spared Al’s life, the two women would be killed for endangering the CRM’s sacred mission (whatever it was). As such, Teddy’s attack likely sparked an ethical standoff for Maggie Grace’s character. Does she leave her allies for dead and protect Isabelle’s secret? Or ask Isabelle to take an unauthorized helicopter trip and save her friends, knowing her girlfriend could be fatally punished?

Al obviously chose the latter, and the public expected the helicopter evacuees to find themselves in grave danger when Fear the living dead season 7 has started. Perhaps the helicopter lands at its outpost and Isabelle faces the consequences of her insubordination, as the survivors – Daniel, Sarah, Luciana, Wes, Jacob and Charlie – enter CRM territory knowing they are are safe from the nuclear fallout, but living with a militia that treats guests with all the hospitality skills of Norman Bates. Al would wonder if rescuing his friends was worth putting Isabelle in danger, and his friends would wonder if being prisoners of the CRM is worth living in a nuclear wasteland.

Otherwise Fear the living dead could have leaned on the helicopter scene from Season 6 with Isabelle ditching the CRM to join Al’s group permanently, thus avoiding the punishment she would inevitably receive upon returning home. Down with a soldier (and, more importantly, a helicopter) the soldiers of the CRM would be on the heels of Isabelle and her new best friends. In addition to giving a more meaty role to a cool but rarely seen character in Sydney Lemmon’s Isabelle, Fear the living dead could have paved the way for a post-apocalyptic cat and zombie chase, as the CRM stalked its enemies.

By defining Fear the living dead season 7 partly in a CRM installation or by inducting Isabelle into the main group, AMC’s first zombie spin-off could have dropped more clues about the primary objective of the Civic Republic, more indications of their awesome abilities and more setup for the next Rick Grimes Walking Dead movie. Establishing the CRM as Season 7’s biggest antagonists early on would also have upped the ante, replacing the late Teddy as the Fear the living deadthe main villain of.

Worry the Walking Dead’s helicopter resolution is an anti-climax

When Teddy’s nuclear strike forced Daniel’s party to accept a ride on a CRM helicopter, Fear the living dead seemed to set up a bigger storyline for Season 7 – something that would connect to The walking dead, World beyond, and the film by Rick Grimes. “Breathe With Me” makes absolutely no sense of a CRM presence, and although the night is still young for Fear the living dead season 7 (and the CRM can still flex its sizable muscles), the fact that Season 6’s helicopter evacuees tell their story through the exhibit is an anti-climax after such a dramatic finale. Al’s explanation barely explains why Civic Republic soldiers aren’t already knocking on their doors, and it feels like Fear the living dead deliberately withholding from bringing back the CRM. It’s a noble endeavor, but unanswered questions become a elephant in the CRM room.

Simply, Fear the living dead The final moments of Season 6 deserved a better immediate payoff than Daniel’s group showing up in Season 7 in the rain, with no real sign that anything untoward was happening to them. Either way, the opportunity to make a great CRM statement up front has been wasted.

Fear The Walking Dead may still bring back the CRM

It’s not too late for CRM to make a splash Fear the living dead season 7. As unlikely as it sounds after “Breathe With Me,” perhaps Isabelle returned home, landed her helicopter as quietly as helicopters can be landed, and immediately faced arrest for having picked up strangers. Future episodes could then find CRM soldiers coming to pick up Daniel and his evacuated colleagues, trying to ensure their silence after the illegal helicopter flight. While still disappointing, this is not how the helicopter group was reintroduced into Fear the living dead season 7, it’s better than no consequences on their secret escape.

Fear the living dead Season 7 could also retain its CRM presence for Padre’s next reveal. A mysterious haven amidst nuclear nature, many viewers believe Padre could be the stronghold of the Civic Republic from which Isabelle’s helicopter takes off. Fred and Bea have revealed the deep secret behind Padre, and it fits perfectly with how CRM works. Sooner or later, Fear the living deadThe protagonists of will follow Alicia to investigate who or what Padre is, and may find themselves stepping right into a CRM facility. Isabelle should pretend she’s never seen Al before, while the others will decide if the CRM is a trustworthy bunch or some other giant red flag. Yes Fear the living dead has future plans for the CRM in Season 7, at least that would explain why Season 6’s helicopter cliffhanger is at an impasse.

More: FTWD: Was Strand Lying About Wendell? (and why he didn’t let Sarah see him)

Craig started contributing to Screen Rant in 2016, several years after graduating from college, and has been fuming ever since, mostly for himself in a dark room. Having previously written for various sports and music media, Craig’s interest quickly turned to television and film, where a constant education in science fiction and comics eventually took off. Craig has been posted on sites like Den of Geek before, and after many hours of coffee hunched over a laptop, part-time evening work finally turned into a full-time career spanning everything from l zombie apocalypse to the Starship Company via the TARDIS. Since joining Screen Rant, Craig has been involved in mildly controversial reporting and ratings, but now works primarily as a feature film writer. Jim Carrey is Craig’s top acting pick, and favorite subjects include superheroes, cartoons, and the unsung genius from the High School Musical trilogy.

a deep reading of colonial violence, and a comedy not to be missed