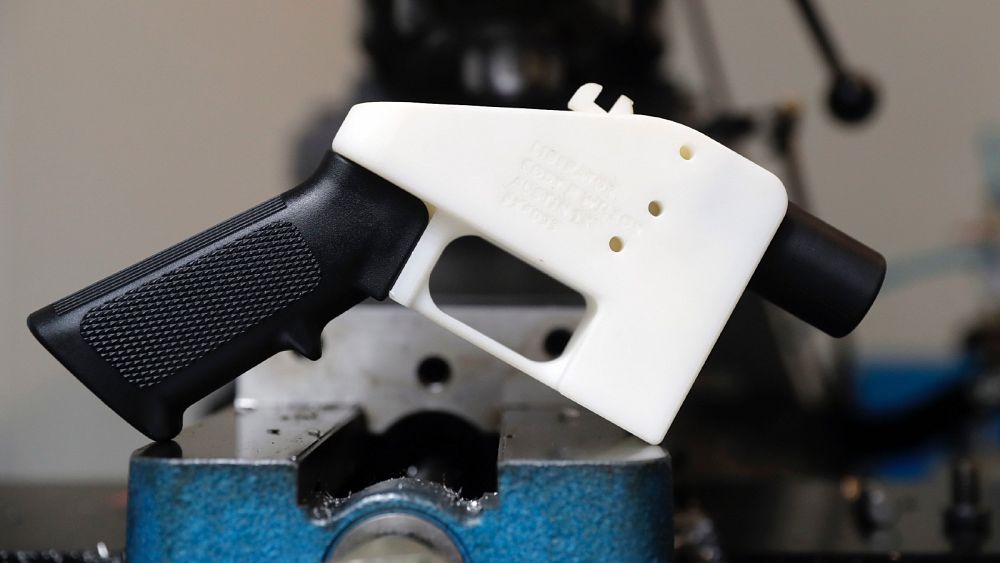 What are 3D printed “ghost guns” and are they also a threat in Europe?

US President Joe Biden’s pledge to crack down on unlicensed ‘ghost guns’ has reignited attention on firearms that can be assembled at home from individual parts, kits or using printers 3D.

Untraceable homemade guns are increasingly appearing in deadly shootings across the United States, and the Biden administration says requiring dealers to affix serial numbers to ghost guns that show up them will help reduce crime. But the armed groups say the government is going too far and violating their rights.

In Europe, where gun control laws are much stricter than in the United States, the threat posed by unlicensed firearms is also of concern. Counterterrorism experts say more should be done to curb their spread, and recent violent incidents suggest these weapons are particularly attractive to far-right extremists.

On October 9, 2019, in the German city of Halle, a young neo-Nazi wielding homemade firearms attempted to storm a synagogue during the Jewish holiday of Yom Kippur. He failed to enter, but killed two bystanders and injured two others.

The attacker broadcast the attack live, in what he described in a manifesto as a mission to fight “anti-whites” and test the functioning of the weapons he had assembled. Some of the weapons he possessed were a mix of steel, aluminum, wood, and 3D printed components.

In most of the Old Continent, people need a permit and a psychological evaluation before being allowed to own a firearm, and only if they can provide a reasonable justification of the reason for which they need it.

But 3D printing changed everything. Gun enthusiasts now only need internet access and less than $100 to craft an illegal but untraceable plastic firearm capable of passing unnoticed through a metal detector.

Homemade weapons have long been the last resort of insurgents, such as Polish resistance fighters during World War II or Chechen rebels during the Second Chechen War against Russia.

But 3D printing has given this ancient practice a modern twist.

“The creation of 3D printed weapons is a fairly new phenomenon. And it really has to do with the fact that 3D printing technology has become democratized over the past 15 years or so,” said Yannick Veilleux-Lepage, assistant professor specializing in terrorism and political violence at the University. from Leiden in the Netherlands.

“It’s old technology. It’s been around since the 1980s, but before that it was really used in very particular environments, like in manufacturing to do things like rapid prototyping,” he told Euronews Next.

Back then, 3D printing was only available to people working in specific industries or researchers at universities. But between the early 2000s and the 2010s, the cost of 3D technology fell and production increased, leading to an explosion in home 3D printing.

Most of them came without harmful intentions.

“But like most technology, it has a dark side, and there’s this subset of the 3D printing community that has become somewhat obsessed with printing weapons,” Veilleux-Lepage said. , which is also an associate member of the International Center for Counterterrorism (ICCT).

Now, with the help of plans readily available online, just about anyone can build their own pistol at home.

Veilleux-Lepage estimates that it would take only 20 to 30 hours of trial and error to make a Liberator, the world’s first model of a 3D-printable handgun, the blueprint for which was published by a young American gun rights activist in 2013.

Other, more elaborate weapon designs, which may require non-3D printed external components, however, could require more money and energy, he said.

Since its attack, the UK has arrested four people for making and possessing 3D-printed weapons, while Spanish police have taken down an illegal site workshop in Tenerife that used 3D printers to produce weapons. Both cases were also found to be linked to far-right movements.

In the Spanish workshop where they seized 3D-printed weapons – including a replica assault rifle and several gun barrels – police found manuals on urban guerrilla warfare and white supremacist literature.

According to Veilleux-Lepage, this style of DIY weaponry appeals to far-right movements that seek to operate outside the control of governing elites and are fascinated with survivalism.

“There are some places where this kind of aspect of creating your own weapon and being able to do it completely outside the purview of government and this notion of self-sufficiency will also translate quite nicely into far-right ideology” , did he declare.

What is Europe doing to fight against 3D printed weapons?

3D printing of firearms by individuals is illegal across Europe.

In theory, weapons can only be 3D printed and manufactured by authorized dealers, and are subject to restrictions such as clearance before private acquisition.

In fact, the threat posed by untraceable ghost guns is high on the radar of European authorities, who are considering new measures to contain it.

In 2018, before the deadly Halle bombing, EUROPOL warned that advances in technology would make 3D printing accessible to more people, and that this could boost the illicit production and trade of firearms on the continent.

In a October 2021 report to the Parliament and the Council of the EUthe European Commission has identified the most dangerous threat as the manufacture of “hybrid 3D printing weapons, which rely on both 3D printed parts and readily available components that are not regulated at scale world, such as steel tubes, metal bars and springs”.

In that report, the Commission said it was assessing whether to also make it illegal to own and share blueprints of 3D-printed weapons.

The UK is also closely monitoring the situation.

“Criminals who use any type of firearm have clear intentions; to spread fear, incite violence and harm our communities,” said Matt Perfect, director of the UK’s National Firearms Targeting Centre.

“Making or possessing 3D printed weapons is covered by existing firearms legislation. We are closely monitoring the impact of 3D firearms and their unique vulnerabilities, working closely with partners to remove the availability of illegal firearms in the UK”.

Can 3D printed weapons be stopped?

Veilleux-Lepage expects to see an increase in the manufacture and use of 3D-printed weapons in Europe and the United States, “simply because this technology exists and is democratizing and is easier to access now. than it was 10 years ago.

But he seriously doubts that 3D-printed weapons can become the weapon of choice for terrorist attacks in Europe.

“If you look at the majority of terrorist incidents in the Western world that have used firearms, homemade weapons are generally not preferred,” Veilleux-Lepage said.

“Particularly when you look at the jihadists, what they’ve been doing is using decommissioned weapons like prop-guns – which are actual firearms – that have been disabled and sought to be re-enabled,” he added.

Even though 3D printing a gun makes it easy for people to circumvent permissions and licenses, it’s definitely not the most immediate method of getting a gun, especially since not everyone may not be familiar with 3D printing.

“There are more reliable ways to get guns,” Veilleux-Lepage said.

He also thinks some practical solutions could help combat the spread of 3D-printed weapons.

Social media giants Instagram, Facebook and TikTok, for example, could agree that sharing information about how to make 3D-printed weapons violates their terms of service, he said.

Technology like the one applied to banknotes, which nullifies attempts to photocopy money, could also be implemented on blueprints for 3D-printed weapons.

“That doesn’t mean that no one will be able to overcome this. Some people will be, ”warned Veilleux-Lepage.

“But it’s about raising the bar, making it harder, making sure that, you know, the angry 15-year-old who’s being bullied at school can’t go and print a 3D printed gun in his bedroom because he is angry.”