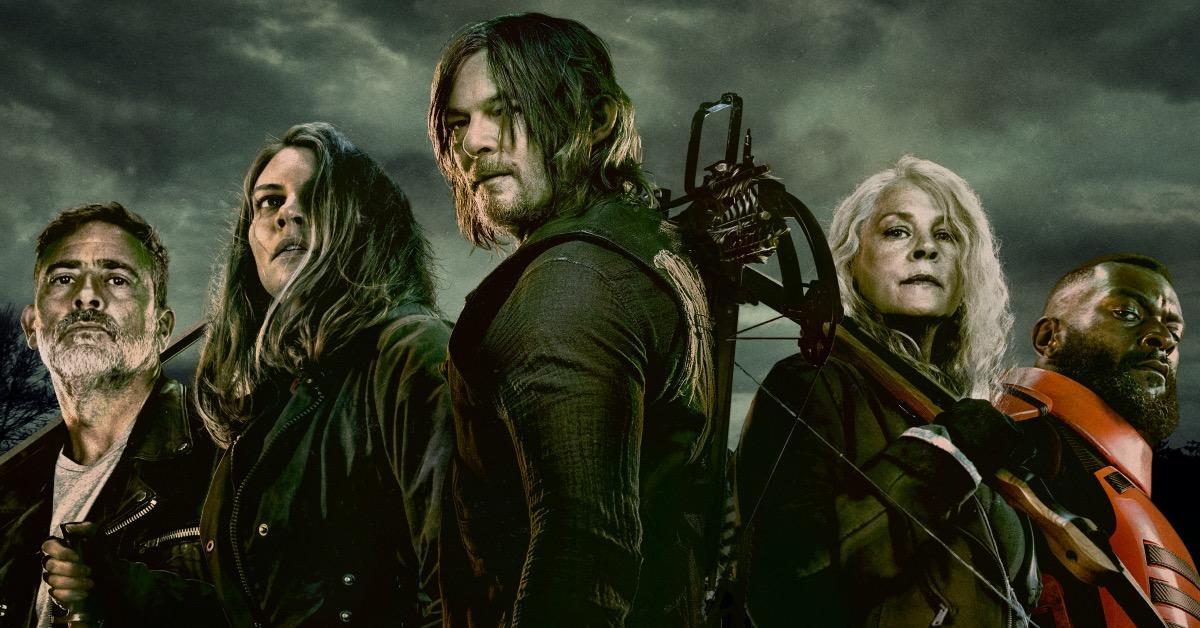 After several years away due to the COVID-19 pandemic, San Diego Comic-Con is back in full swing. The convention has become host to a wide range of movies, TV shows, and more. The Walking Dead is certainly among them. The fan-favorite AMC franchise returned to Hall H to much fanfare, not only giving the first look at the upcoming Tales of the Living Dead anthology series, but celebrating the final season of The Walking Dead. Keep reading for our rundown of everything you need to know about The Walking Dead universe panel!

Chris Hardwick moderates the panel and presents Tales of the Living Dead, the new anthology series. They play a trailer – it features Terry Crews as a doomsday prepper, Parker Posey as an aloof suburban woman, and more.

Gimple says the show grew out of questions fans were asking about the show and says they wanted to evolve and invent the mythos. They had considered making it a series of specials, but it worked better as an anthology. Gimple teases that it’s rooted in larger-than-life stories and characters people can latch onto. Powell reveals that she was excited to tap into things she hadn’t seen on the show before and push the boundaries. She teases some of the ideas are very crazy and offbeat.

Satrazemis was excited about the idea of ​​bringing new people and new concepts into the universe, calling it a “dream”. He teases that there’s still more the universe can still do. Crews expresses how thrilled he was to join the franchise and the realm of horror, and was inspired by night of the living dead. He praises Munn and reveals that it was the first time they had worked together since The press room.

Ramirez revealed that he was briefly a voice for Javier in the Walking Dead video game, before the character aged. He says the universe tells “a beautiful little story” against a horrific, massive backdrop. Morton talks about reprising his role as Alpha in what is essentially a prequel episode. Morton says she was “so disgusted” when Alpha passed away and was “beyond thrilled” to be back. She wanted to know what made Alpha who she was. She says the Season 9 flashbacks were from Lydia’s perspective, so they might not be truthful.

It’s time for questions from the public. Crews reveals he’s had nightmares about zombies, especially around the pandemic. Powell teases that in addition to Alpha’s return, they’ve added something that mythology fans will recognize. Morton is asked if she would like to do an Alpha spin-off and accepts. Hardwick jokes that it happens. Crews’ son asks how anyone would survive a true apocalypse. Ramirez says he would have a survival kit. The crews argue that it’s the humans betraying themselves that would be the real threat. Crews says his favorite character was Tyrese. Crews praises Morton for such a terrifying character and also shouts out to the fans. Powell hopes they can keep new and old fans happy. Satrazemis sheds light on the experience working on the series and thanks fans. He and Morton then kiss,

The Tales team takes a group photo. Hardwick reveals that the cast of Fear is about to begin production on a new season and releases a video of Lennie James wishing the audience well.

Hardwick talks about his own journey with the show and thanks fans for it. He argues that it’s rare for a show to last that long. A trailer for the final episodes airs and Hardwick introduces the panelists – Gimple, Angela Kang, Greg Nicotero, Melissa McBride, Josh McDermitt, Ross Marquand, Seth Gilliam, Lauren Ridloff, Cailee Flemming, Michael James Shaw and Norman Reedus.

Gimple confirms the final season premiere date and also reveals that a fan event will be taking place on the West Coast on November 20, with more details to be revealed later.

Kang teases that the final season sees the characters clashing with the Commonwealth, and there are plenty of twists. She says the series balances the spirit of Robert Kirkman’s writing in the comics, but charts its own course. Nicotero says filming the final episodes was “no joke,” but they felt obligated to the fans to stick the landing.

Reedus is about to start crying and calls the start of the series a “pure thing”. He jokes that he wants to cry and hug with everyone in the room – but will wait until after COVID. McBride chokes up talking about the show, and fans cheer her on and tell her they love her. She says she is “so grateful”. McDermitt is asked about his blonde hair and argues that it was actually comic clarification for Eugene. He remembers the crotch scene and when Eugene threw up on Rosita. Marquand talks about being a fan first, then joining the family, and says it’s going to be weird when the show is over. Gilliam calls the experience “surreal” and praises the engagement and love fans have had for the show. He says he couldn’t have imagined his story going where it was, but in a good way. He says his favorite quality about Gabriel is his courage, as he overcame every situation thrown at him.

Ridloff talks about going from a kindergarten teacher to working on the show and says her class just got so much bigger. She says the show is a mirror of society. She says she still can’t accept being an action star. She says the show was created for the fans and the cast and crew care so much about them. Flemming thanks fans for their love and support. She says going to work and playing with swords is great fun. She talks about Judith growing up entirely in the apocalypse and laments that she probably never had an ice cream cone. Shaw says he never imagined himself stepping into character, but it was a joy to play. He talks about his first day on set, where he got very cold in a warehouse, and his last day on set, where they watched the sun come up. Nicotero reveals that they sometimes use conditioner to grease walkers’ hair so it smells good.

A fan asks about the closing party, which Gimple said was “lovely” even though a lot of people were crying. The post-production team had also put together a one-second edit of each episode, which they hope to release after the show ends. A fan asks about a movie, which Hardwick says they’ll see later. Another fan asks about Rick’s story closure – which they’ll also talk about later.

A fan asks about the last days of filming, Marquand talks about when the confetti cannons went off after the series ended. Nicotero reveals that the last episode lasted for fifteen days and different actors took place all these days. Gilliam says the actors often showed up to watch other actors wrap up. Ridloff reveals that she packed up at 2 a.m. and was overwhelmed and exhausted. A fan asks about Reedus’ on-set pranks with Andrew Lincoln, and he says he doesn’t think he pranked anyone else because Lincoln was an “easy target.”

A fan asks if anyone has any theories about the origin of the zombie apocalypse, and Gimple argues that part of the beauty of the comic was that there was no straight answer. Reedus jokes about Fabio being hit by the goose on a roller coaster, and Gimple jokes about the new theory.

A fan asks about Daryl and Carol or Daryl and Connie, and Reedus jokes that there is a world where the three of them are happy together. He also says Daryl and Carol’s story isn’t over.

McBride talks about the fun of being able to play so many different versions of Carol, including Commonwealth. A fan asks about playing characters that weren’t in the comics. Reedus talks about filming his very first scene and running around with the idea of ​​having a chip on his shoulder. He also says it was liberating not to be in the comics,

A fan asks what his favorite scenes are and what he will miss. Shaw says it hasn’t aired yet. Flemming says it was his first kill of Walker. Ridloff says it was with Daryl and Dog. Gilliam says the episode “one more” with Ross and Robert Patrick. Gilliam says he will miss singing in his trailer and teasing his bandmates. Marquand and Gilliam sing a little David Bowie. Marquand says the composition with Negan. McDermitt says it hasn’t aired yet, but it used to be the lineup because he loved seeing Michael Cudlitz die.

McBride says the very first episode with Morgan putting his wife down and Scott Wilson with his bible in the jail. Reedus recounts the scene where he ran into Carol’s arms. Reedus says he will miss the crew and being in Georgia. Nicotero says filming on location made the experience so different, and his favorite scene was the hollow when Carol goes to Terminus. He says that in his head, the show isn’t over yet, and asks for a round of applause for the actors who were previously in the show, as well as for Frank Darabont. Kang says some of her favorite scenes are yet to come, but she loves the Season 4 finale scene between Rick and Daryl.

Reedus says “it was truly an honor to be on this ride with you guys”, and is amazed at the impact the show has had. The cast receives a round of applause and everyone leaves except Gimple.

Gimple confirms that Lauren Cohan and Jeffrey Dean Morgan have begun filming their spin-off and announces new cast members. A video message is then broadcast by Cohan and Morgan.

Finally, Hardwick asks Gimple about Rick Grimes movies – and Gimple says he can’t talk about it, but knows someone who can. Andrew Lincoln and Danai Gurira come out and announce that they will be returning as Rick and Michonne for a six-episode miniseries on AMC+, instead of a movie.

The Walking Dead: What Rick and Michonne’s New Show Could Be About | Comic-Con 2022