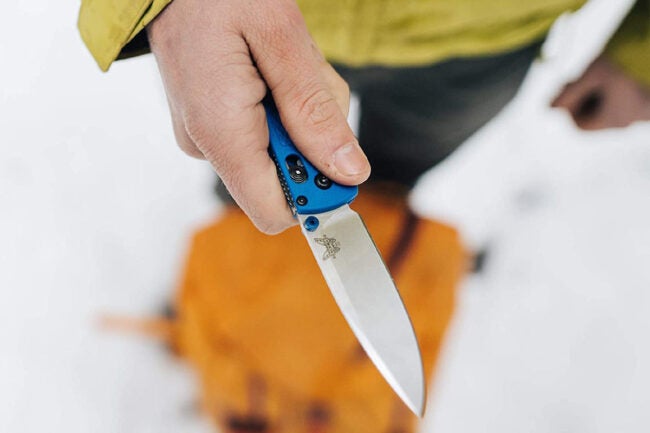 Pocket knives are everywhere. They come in an almost endless variety of shapes and sizes and are useful for cutting twine, whittling wood, cleaning fish, carving pumpkins, or any one of hundreds of everyday tasks.

The big advantage of a pocket knife over a fixed knife is that the blade folds safely away when not in use. It also makes a pocket knife more compact and easy to carry. Thereâ€™s space for a pocket knife in every pair of overalls or jeans, jacket, bag, rucksack, or tool kit.

The only challenge is deciding which model offers the performance you need. To help you find the answers, weâ€™ve selected 10 of the best pocket knife brands and picked a favorite knife from each brand that highlights its qualities.

Known for: One of the leading brands for field knives, its original â€œbuck knifeâ€ design has been so widely copied that the name is synonymous with folding hunting knives.
Editorsâ€™ Choice: Based on the original Buck Knife, the classic 110 Folding Hunter knife, available at Walmart, is a well-balanced, versatile field tool made to the brandâ€™s legendary quality standards.

Buck Knives were first made in Kansas in 1902 by young blacksmith Hoyt Buck, who discovered a unique method for improving edge retention. The brand developed through subsequent generations, and today, Buck Knives is still a family firm based in Post Falls, Idaho.

The companyâ€™s range of products has grown to include hunting, fishing, survival, and recreational knives, and even cutlery. Each style is known for blade strength, sharpness, and outstanding construction quality. These are not cheap pocket knives, but they are known for their durability and are, unarguably, one of the worldâ€™s best pocket knife brands.

The company also produces branded shirts, hats, and other accessories, including a tool no owner should be withoutâ€”a pocket knife sharpener.

The U.S. base of operations for Kershaw Knives is in Tualatin, Oregon, but the company sources products from all over the world. The parent company, Kai Industries, makes all manner of cutting tools, from surgical instruments to razors.

The range of pocket knives is immense, as is the wide array of steels the company uses for blades and the diverse materials it uses for handles. Whatever style of pocket knife youâ€™re looking for, Kershaw Knives likely has a version, though gauging quality and value can require considerable attention to detail. To be fair, part of this decision is simply the vast choices on offer, and many of the options are very affordable. However, customer feedback suggests that while the knivesâ€™ renowned opening action is always smooth, some lightweight varieties arenâ€™t as robust as they might be.

Known for: Emerson knives are, first and foremost, tactical weapons used by military and law enforcement agencies, including U.S. Navy SEAL Teams, Delta Force, Army Rangers, and the British SAS.
Editorsâ€™ Choice: The Emerson CQC-7BW, available direct from Emerson, is based on the original groundbreaking tactical folding design with a hard and extremely sharp Tanto blade, plus the brandâ€™s â€œWaveâ€ feature for rapid deployment.

While these knives may be visually appealing, the focus is without a doubt on practicality. The brandâ€™s motto is â€œ100 Percent Tough, 100 Percent American,â€ with all design and production based in Harbor City, California.

The brandâ€™s range of combat pocket knives is extensive, including several specifically for left-handed users. The toughness of Emerson blades is such that they are also used in some Kershaw knives. Emerson knives are not a casual purchase due to the relatively high cost, but durability is usually exceptional. That said, customers have reported occasional quality control issues and a few complaints about warranty work when the knives developed faults.

Known for: Generally referred to as CRKT, the brand produces an enormous range of affordable edge tools from flipper knives to tomahawks.
Editorsâ€™ Choice: The CRKT Pilar EDC folding pocket knife, available at BladeHQ, is typical of the brandâ€™s functional and affordable approach with an ambidextrous thumb-slot opening, stainless steel handle, and reversible pocket clip.

The Columbia River Knife and Tool Company is based in Tualatin, Oregon. If that sounds familiar, itâ€™s because the founders, Paul Gillespi and Rod Bremer, began their knife-making careers at Kershaw Knives before setting up their own company in 1994.

The CRKT philosophy is one of using designs and manufacturing from the best possible sources, and the company is known for a number of different collaborations. This often results in unique and fascinating styles and allows CRKT to offer an enormous range of pocket knives and other edge tools. Its reputation is one of producing affordable knives that donâ€™t feel cheap. CRKT may not have the kudos of some of the best pocket knife brands, but it likely has a tool for every taste and budget.

Known for: The Benchmade name comes from the original method of precision components assembled by hand, and while much of its production is now automated, the commitment to quality remains.
Editorsâ€™ Choice: The Benchmade Bugout 535, available on Amazon, has a balance of light weight and stiffness that makes it equally suited to everyday carry, campsite, and wilderness use, or just a little peaceful whittling.

Founder Les De Asis started out making balisong (butterfly) knives in California in 1979. The company, originally called Bali-Song, became the Pacific Cutlery Company in 1986. After production and financial difficulties, the brand re-emerged as Benchmade in 1988. Today, it is based in Oregon City, Oregon. Benchmade Knife was the first knifemaker to use laser cutting, allowing the company to work with harder blade steels than had previously been possible.

While production is in the U.S., the brand works with several leading knife designers around the world to create high-quality edge tools for every purpose. There are three classes: blue for standard knives, gold for knives that use exotic materials, and black for extreme-duty military models. They are all premium quality, and the prices reflect this quality. However, some critics feel thereâ€™s little justification in Benchmade knives being more expensive than CRKT or Kershaw knives.

Known for: German brand Boker Manufactory is perhaps best known for its classic-styled pocket knives but produces a staggering variety of affordable models from tactical to mushroom knives.
Editorsâ€™ Choice: The Boker Knives Copperhead pocket knife, available at Knife Country, is typical of the classic style that made the brand famous and still offers terrific everyday practicality with twin blades, a bone handle, and brass fittings.

Boker Manufactory, also known as the Tree Brand for the logo etched into its blades, may be the worldâ€™s oldest pocket knife brand still in existence with a history that dates back to the 17th century. Today, the factory in SÃ¶lingen, Germany, produces all manner of knives, razors, axes, and swords.

Perhaps because of the popularity of its classic pocket knives, Boker Manufactory is sometimes considered an old-fashioned brand. However, its products are often innovative. The company was the first knifemaker in the world to use a ceramic blade on a pocket knife. Those who overlook Boker might well miss out on a bargain: Itâ€™s difficult to find better performance for the price.

Known for: Cold Steel Knife and Tool claims to make the strongest, sharpest blades in the worldâ€”and it has a reputation for pushing knife design to the limit with some wild and wacky designs.
Editorsâ€™ Choice: The low-cost Cold Steel FGX butterfly knife, available at KnifeCenter, is made from Griv-Ex glass-reinforced plastic, and despite a complete lack of metal components, it is nevertheless a very capable self-defense weapon.

Founded in 1980 in Ventura, California, Cold Steel Knife and Tool has a reputation for innovation that borders on weird, boosted by its blood-curdling marketing videos. In addition to a wide range of pocket knives, the company also makes axes, machetes, sword canes, and even blowguns. Cold Steel is not all about shock and awe, though. Its superb Tri-Ad blade locking system is strong enough to support up to 800 pounds of hanging weight.

If thereâ€™s a criticism of Cold Steel knives, itâ€™s that the â€œordinaryâ€ models are just thatâ€”neither exceptional nor cheap. However, the company does produce some designs you simply wonâ€™t find anywhere else for shoppers looking for a unique knife.

Known for: Spyderco is known for groundbreaking designs and experimental use of blade materials while never forgetting the practical necessities of its tools.
Editorsâ€™ Choice: The Spyderco Manix 2 pocket knife, available at BladeHQ, features the slender, leaf-shape blade typical of the brand, a reliable ball-bearing locking mechanism, and an ambidextrous reinforced co-polymer handle that offers extreme durability.

Spyderco was formed in 1976 by Sal and Gail Glesser. The company is still based in Golden, Colorado, where it began as a manufacturer of knife sharpeners. Spyderco introduced its first knife, the Co1 Worker, in 1981 and set the standard not just for one-handed, ambidextrous blades but also for including a pocket clip and offering a fast-cutting serrated blade.

The brandâ€™s innovation has garnered numerous awards and expansion to include production facilities in China, Italy, Japan, and Taiwan, in addition to the U.S. Sal Glesser is now recognized as one of the worldâ€™s leading designers, and Spyderco is considered one of the best pocket knife brands. In addition to pocket, fixed, tactical, and survival knives, the company produces gentlemanâ€™s, marine, and culinary models. They feel good in the hand and are durable and competitively priced.

Robert Young Pelton is a man of many talentsâ€”an adventurer, war correspondent, author, director, and former host of Discovery Channelâ€™s â€œThe Worldâ€™s Most Dangerous Places.â€ In 2008, he became a knifemaker, creating DPx Gear and the now-famous Hostile Environment Survival Tool (HEST) knives. From the start, these knives were designed to be multifunctional as well as nearly indestructible.

While the brandâ€™s range of knives has grown, its original principles remain intact. However, DPx Gear doesnâ€™t manufacture a lot of different types of knives to suit all users. It makes tough, lightweight, purposeful tools for hard use in tough situations. They arenâ€™t cheap, but itâ€™s unlikely one will let you down.

Known for: Gerber Gear combines constant innovation with long experience to produce a wide range of top-quality knives and other edge tools at affordable prices.
Editorsâ€™ Choice: Typical of Gerberâ€™s blend of smart design and functionality is the Gerber Superknife Edge, available on Amazon. This folding utility knife features a textured aluminum handle for grip and a stainless steel blade holder that provides fast and simple blade changes at the push of a button.

Gerber Gear has been around since 1939 and has grown to become a major manufacturer of knives, axes, multi-tools, saws, and scissors. The Finnish company Fiskars has owned the company since 1987.

The company promotes that it is the number one supplier of knives to the military. The manufacturing facility in Portland, Oregon, goes through 686,000 tons of U.S. steel per year. While much of the production uses modern equipment and robots, it still employs skilled craftspeople for specialist tasks like blade sharpening.

Gerber Gear is continually innovating, testing new materials, and introducing new models. Enthusiasts can also customize their own knife, using one of several popular Gerber models as a base. Affordability adds to the popularity of Gerber knives, though there has been some recent criticism of the quality of its cheaper knives, many of which come from the Far East.

How to Build The Ultimate Bug Out Bag