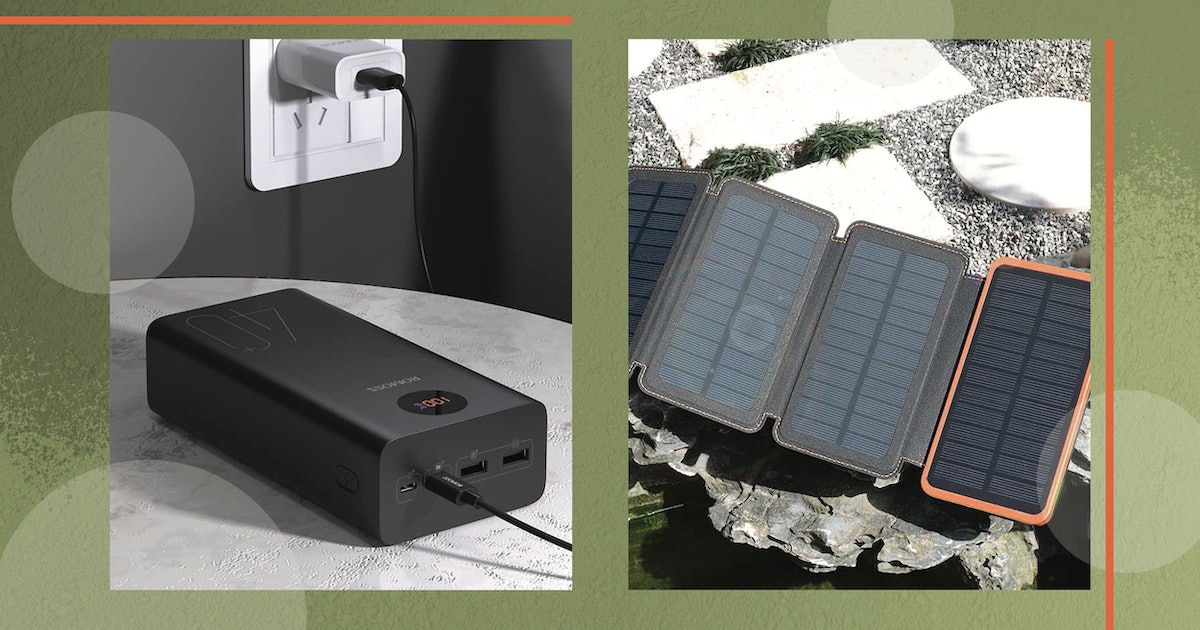 iPads are popular for their portability, so a portable charger would be handy to carry. The best portable iPad chargers have a battery capacity of at least 10,000 mAh so you can charge your iPad anywhere, even if there’s no outlet in sight. All you need is the right combination of power bank and charging cord that will be compatible with your iPad model — and if you don’t already have the necessary cords, you’ll find several options below.

When choosing a portable charger for your iPad, battery capacity – measured in milliampere-hours (mAh) – will be the primary consideration as this determines how many times it will charge your tablet before it needs to be recharged itself. While the amount of power needed to fully charge an iPad will depend on the efficiency of the device itself, the power bank, and the cord you’re using, advice suggests that around 10,000 mAh should be able to fill the tablet battery once. Each power bank below has at least 10,000 mAh, but the higher the capacity, the more you can charge your iPad and other devices. However, larger capacity power banks will also tend to be heavier, larger, and/or more expensive, so consider how much power you’ll actually need before simply opting for the one that has the most power. Highest mAh.

Additionally, power banks have different types of input and output ports, and often feature more than one type. Input ports charge the power bank itself and are often USB-C or micro-USB ports, but if you’re looking for true off-grid portability, you can opt for a solar-powered power bank. On the other hand, the output ports are for charging your devices. USB-A ports are the most common and will work great for charging, but USB-C ports can charge devices faster and may be your preference if charging speed is important to you.

Next, think about the charging cord you’ll need for your iPad model. For example, the current generation of iPad Pro and iPad mini charge via USB-C, while the standard iPad charges via a Lightning cord. Your iPad probably comes with a charging cord that will be compatible with a power bank, but I’ve also included a USB-C to USB-C cord for faster iPad Pro and iPad charging min. For standard iPads, there’s a fast-charging Lightning to USB-C cord and a Lightning to USB-A cord if you want a spare.

Finally, although power banks do not need be Made for iPhone (MFi) – a certification that they have been tested and approved for safe use with iPhones and iPads – the cords they are used with should be. The cords included in this list are made by Apple and do not need certification, but if you use cords you have at home or buy non-Apple cords, you can verify that they are MFi certified in Apple. phone book.

Here are some of the best portable iPad chargers, including power banks and their corresponding cords.

This budget-friendly 10,000mAh power bank will ensure you have a full iPad charge on hand while still being portable. It’s slim, weighs less than half a pound, and slips easily into a bag or purse pocket. It comes with a micro-USB to USB-A cord for charging the bank and has an LED charging light.

A reviewer wrote: “I’ve used previous portable chargers and either they were too small and never held much battery, or they were too big to the point that it was inconvenient to travel with. The Anker portable charger, on the other hand , is somewhere in the middle, it can charge my iPad pro from nearly dead to full battery and still has charge left to charge my phone as well Definitely one of the best purchases I’ve ever made.”

2. A powerful yet slim power bank

For twice the power of the base option with only a slight increase in weight and size, this Anker 20,000 mAh power bank packs a punch in a compact, easy-to-carry form. It comes with a carrying case and a micro-USB to USB-A cord for charging the bank, and it also has an LED charging light. Moreover, you can charge two devices simultaneously. The charger is available in two colors: black and white.

A reviewer wrote: “This thing is a lifesaver, I was able to charge my iPad to 100% and the brick still had half the battery. Even though it takes a long time to charge, it’s worth it because the life of the battery is very long, I have spent weeks without charging it and it still has full autonomy.

3. A bigger but more powerful bank

With more power comes a heavier and larger power bank, but this 30,000 mAh power bank strikes a good balance between size and power. The bank doesn’t come with cords to charge itself or your devices, but chances are you already have compatible cables. If not, you can keep scrolling to find the cords you need. It also has a charging light and lets you charge up to three devices at once.

A reviewer wrote: “I’ve been using this power bank for a few weeks since I bought it. Absolutely love it! It’s space-saving, but it packs a lot of juice that we can charge our iPhones and iPads multiple times (8-10 once) once the power bank is fully charged.

4. The power bank with the largest battery capacity

This high capacity power bank has a massive 40,000mAh battery, the largest capacity on this list. It’s perfect if you need a lot of battery in a form that’s still small and light enough to fit in a bag or suitcase without too much hassle. The power bank has an easy-to-read LED display that lets you know how much battery is left and allows you to charge up to three devices simultaneously. However, it does not come with cords.

A reviewer wrote: “I’ve been using it for a while now. Product works as expected. Able to charge my iPad 3-4 times on a full charge. I haven’t tried charging my laptop. The downside is that the packaging does not come with a wall plug/adapter.

To keep your devices powered when you’re off the grid, consider a solar-powered power bank that can charge your iPad using only the power of the sun. It has four fold-out solar panels but can also be charged via micro-USB if you prefer to use the solar function only in case of emergency or power failure. You can charge up to two devices at once. The power bank is available in three colors, comes with a micro-USB to USB-A cord, and has a built-in LED flashlight.

A reviewer wrote: “I’ve used it a lot to charge my iPad, phone, and Bluetooth speaker. It packs a lot of power and I’ve never completely drained it. It takes a long time to charge on solar power, so plug into the wall when you can but solar is a great option to have We just used it during an extended power outage and I never worried that my phone wouldn’t charge We Used it to charge my iPad so I could watch TV during the blackout. Worked fantastic. Would love to own another one when I can for my bug out bag!

1. An additional Lightning to USB-A cord

This Lightning to USB-A cord can be used to charge a standard iPad from any power source with a USB-A output. It is available in lengths of 0.5, 1 and 2 meters.

This USB-C to USB-C cord can be used to charge an iPad Pro or iPad mini from any power source with a USB-C output. It is available in lengths of 1 or 2 meters. And if you want to charge your power bank through its USB-C port, you can pair this cord with a USB-C power adapter.

A reviewer wrote: “I needed a longer cable to connect my iPad Pro to the charger while watching movies on the big screen that I play through the iPad Pro. This did everything I needed.

3. A USB-C to Lightning cable

This USB-C to Lightning cord can be used to charge a standard iPad from any power source with a USB-C output. It is available in lengths of 1 or 2 meters.

A reviewer wrote: “This cord is awesome!! Use it to charge my iPad and iPhone super fast while plugged into my MacBook pro – highly recommend!

‘Everything Boris Johnson says is just slogans’: 14-year-old schoolboy fights to save the oceans | Activism