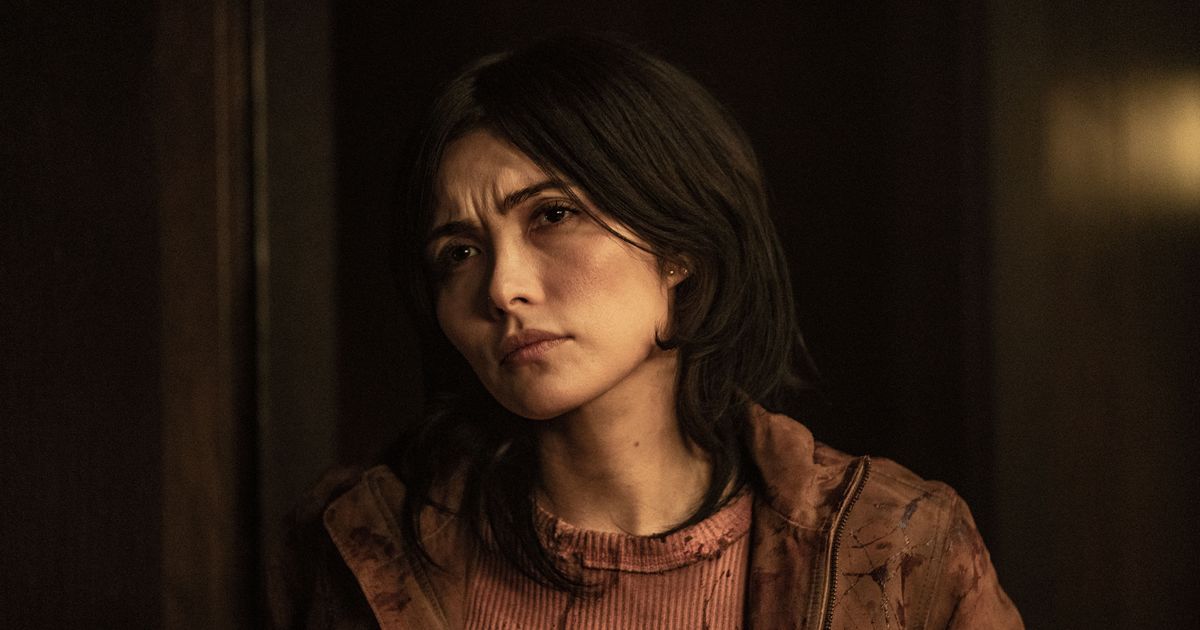 For the best or for the worst, Tales of the Living Dead saved his best episode for last. “La Doña” feels like it came out of a rushed elevator pitch: “What if our horror show had had, uh… After horror?”

In this case, the first horror is obviously a zombie apocalypse. But the second horror — the real horror – is a classic ghost story that happens in the night, like revenge Bruja asks for justice from beyond the grave. It’s a more natural fit than the sci-fi time loop of “Blair/Gina,” if only because the ghosts and jump scares intersect with the zombies a little more gracefully.

Our “heroes” – or, more accurately, the two not-so-great people at the center of this story – are Eric (The Falcon and the Winter Soldier alum Danny Ramirez) and Idalia (Daniella Pineda, who starred in Netflix’s one-shot live-action stab cowboy bebop). As they wander through the night, Idalia suggests they seek refuge with Doña Alma, a local healer whose secluded mansion also serves as a great place to hide from bad weather and zombies.

Part of the fun of “La Doña” is seeing how a zombie apocalypse justifies the kind of silly decisions people make in horror movies. Place d’Alma is obviously bad news: an imposing front door, walls of crucifixes, dozens of lit candles. The moment Idalia arrives, she hears chilling whispers. But while this couple – especially Eric – should probably be a little more pissed off that they’ve walked through the doors and walked straight into a B-horror movie…where else are they going to go? Go back through the door and enter night of the living dead Again? Are you really will you avoid sleeping on the soft mattress in the late owner’s room when you’ve been sleeping in the woods for months?

Eric and Idalia’s actual acquaintance with Alma is brief and not so pleasant. When the older woman discovers them in the house, she is very generous, offering bowls of Guisado, a bathroom with running water, and even a few spare blankets they can take on the road—provided they leave in the morning. Eric bristles and slams his hand on the table, and Alma is surprised enough that she smashes her head on the table and dies. It looks like a freak accident, but you don’t get the sense that Eric is particularly remorseful about this tragic turn of events.

With the house keeper dead, Eric proposes that they claim this lavish and spooky fortress for themselves, and Idalia reluctantly agrees. When worried about the bad energy that might linger in the house, Eric has a quick response: “It’s only bad if you believe it’s bad.”

Would you believe it’s a little more complicated than that? The rest of the episode is peppered with old horror tropes that Tales is more than happy to dust off and reuse. Eric hears a mysterious voice in the night and discovers it’s a parrot that keeps saying scary things. Idalia is convinced that she sees fleeting glimpses of Alma in the house. In a particularly bizarre CGI flourish, Idalia hallucinates or experiences little metal Jesus Christ jumping off crucifixes and crawling all over his body.

“La Doña” has so much fun with all that nightmarish imagery that it doesn’t establish much of a plot, but it doesn’t either. need a lot of a plot. As Eric and Idalia experience separate scares, they turn around, increasingly convinced that the other is going insane. (The episode kind of fakes the possibility that they are goes crazy but doesn’t engage enough to make it a really plausible read.)

But even if the haunting definitely turns out to be real, Eric and Idalia carry a lot of guilt. We get just enough information to learn that Idalia and Eric likely played a part in the death of Maria, the woman who told Idalia about Alma’s house in the first place, and that Eric stole guns. to his friends. As Eric smugly says earlier in the episode, when Idalia wonders if they should leave the house before it’s too late: “Things have changed. People take what’s in front of them. That’s it.”

Life pays you, don’t you think? Unfortunately for Eric and Idalia, this particular episode of Tales takes place in a rigidly moral universe, where they have committed many sins. So when Idalia emerges from the basement covered in blood, saying everyone they’ve killed is waiting for them there, it’s obvious they can’t hide anywhere.

The couple go down to the basement and Deborah Kampmeier’s staging becomes wonderfully surreal. We don’t know what head we’re in: just a whirlwind of zombies led by Alma, while Idalia and Eric insist that all this madness is in each other’s heads. As their violence against each other becomes physical, their victims also swarm. When the dust clears, the corpses of Eric and Idalia are on the floor of the empty house – which again belongs, as always, to Doña Alma, who is staring smugly at a portrait on the wall with her parrot on his shoulder. At the required pace.

It’s an admirably dark note for the end of the season. And maybe even for To display go out, like Tales – at least as of this writing – has yet to be picked up for season two.

But even though, as the record shows, I’ve been consistently disappointed with this series, I still hope it comes back for another run. At a time when The Walking Dead fatigue has set in for many stale fans, a fun and experimental one-shot TV show still seems like the best possible way to enjoy a gruesome little zombie story every week without needing to catch up on frame seasons background.

Even when Tales stumbled the hardest, his sheer elasticity gave way to optimism that the next installment might redeem him. That’s the beauty of an anthology series: each episode is a chance to wipe the slate clean and try again to deliver the best story you’ve ever told.

• It’s the end of the first season of Tales of the Living Dead! What was everyone’s favorite episode? What did everyone like the least? What more (or less) do you hope to see if the show returns for season two? Leave your thoughts in the comments below.

• A fun idea that I sincerely hope to see: a musical Tales of the Living Dead episode, which apparently has already been written.

• There’s a photo of the bedroom wallpaper that “blinks” at Alma reminiscent of Charlotte Perkins Gilman’s classic short story “The Yellow Wallpaper,” which you might remember from high school English.

• Other memorable scares: Idalia looking at her reflection in the sink and seeing hands strangling her from behind, Idalia imagining Eric kissing her neck like a zombie bite, and Idalia seeing scary photos of herself and Eric in Alma photo frames. It’s been a pretty tough time for Idalia in general.

• And a last Tales entry into the endless list of Walking Dead names for zombies that are not “zombies”: sonambuloswhich means “sleepwalkers” in Spanish.

By submitting your email, you agree to our Terms of Use and Privacy Notice and consent to receive email correspondence from us.