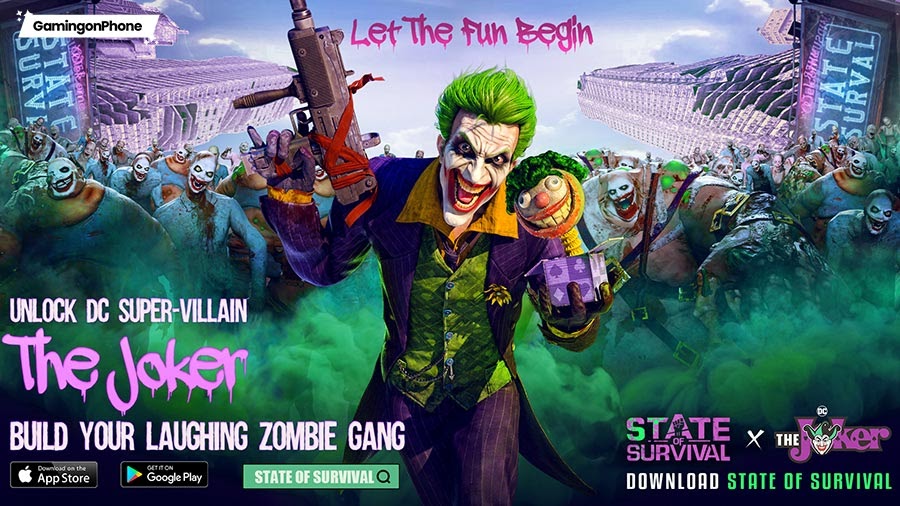 The world is collapsing, it’s absolute chaos. With each passing minute, more settlers are infected with this new virus which turns them into brain-dead zombies. These hungry undead would devour anything they could get their hands on. Fortunately, you have survived until now.

It’s basically the premise of the State of Survival games, a post-apocalyptic strategy where your goal is to create a colony strong enough to withstand the horrors of the horrible undead-infested world. Who knows, it might also come in handy in real life in the near future.

Falling in love with the protagonist is pretty over the top. The fun starts when you feel for the bad guy. Or better yet, partner with them. The game with the new collaboration brings our favorite and most iconic villain, Joker, into this zombie apocalypse. When it’s your life on the line, trusting a smart maniac like Joker is a tough decision.

A terrifying race of laughing zombies begin to attack, as Joker shows up with his calm demeanor in the chaos. He could be one of them or just a survivor as he says. To see how the story unfolds, let’s jump right into the gameplay.

These survivors found refuge. In the beginning, your colony is quite small with only a few basic buildings. To expand it, you will need to clear the surrounding area of ​​zombies.

State of Survival: The Joker Collaboration has several different resources, such as food, wood, iron, gas, energy, and a few others. To get them, you will have to complete simple tasks. These include clearing surrounding areas, rescuing survivors, constructing or upgrading other buildings, and as you progress the variety of tasks increases.

To rescue survivors or clear a place of zombies, you deploy some of your heroes and they fight zombies. Each hero has their own unique skills and styles that they can use during battle.

Players must build a community to fight the undead. You will be able to befriend other players in the game and make alliances. You can attack settlements of players from other alliances and plunder their resources and they can also attack yours.

It’s a mix of both genres where players split their time between battles and upgrade their base. However, the object of the game is to survive. Take down enemies, build bases, feed your crew, protect your headquarters and above all stay alive.

Highlights of State of Survival: The Joker Collaboration

State of Survival: The Joker Collaboration has a concise tutorial at the start. But throughout the game, if you get stuck anywhere, it gives light nudges indicating what to do next. These guidelines are very useful even at higher stages of the game.

The mixture of genres makes the game more exciting. You manage your space, defend your area, strategize, and move into front line combat. This adds up to a well-rounded experience that doesn’t become stagnant or boring.

The soundtrack, however, is the highlight of State of Survival: The Joker Collaboration. This helps to increase the tension, especially in the fight scenes. It plays subtly in the background, and as you encounter tougher enemies it becomes more and more prominent. This greatly contributes to the apocalyptic feel of the game.

Survivors have their unique personalities and they maintain their separate identities throughout. The voiced dialogues give a realistic conversational feel to the game. Maddie’s attire, voice, dialogues, and even her combat tactics perfectly match her cheerful and sweet personality. And the same goes for all the other heroes. The character building is truly commendable.

State of Survival: The Joker Collaboration is light on the phone, requires a small amount of storage in exchange for a good amount of content. The game works on almost all devices.

Weaknesses of State of Survival: The Joker Collaboration

The biggest problem I faced was that I had absolutely no control over the Joker. The character appears and exits as it pleases. The game does not guide the process of integrating Joker into the team.

In fact, in real zombie fights, levels are completed pretty much automatically. You are only there to place characters and guns and perform special moves. Since, the combat is the main part of the game, the lag is a major drawback.

State of Survival: The Joker Collaboration has an overview for all of its modes. It doesn’t feel like a first-person fighting game or even a role-playing game. Instead, it’s like watching a streaming movie or game.

Although the slots are graphical, they are pretty decent. But the visuals are pixelated. This may differ from device to device. On my Samsung A10, the image quality was compromised.

Suggested improvements for State of Survival: The Joker Collaboration

All the tasks, management and planning leading up to the zombie fight are amazingly crafted. But the combat itself needs a lot of improvements. More player involvement, letting them move and shoot each other would bring a better combat experience.

Also, developers need to add different angles. In construction and agriculture, the bird’s eye view works. But when fighting or defending a headquarters, a first-person view is much better.

The most important feature to add is to get Joker earlier in the game. They might have a mini tutorial for what fights and how many resources later would you get Joker in your team. Otherwise, the player continues aimlessly and randomly stumbles upon Joker.