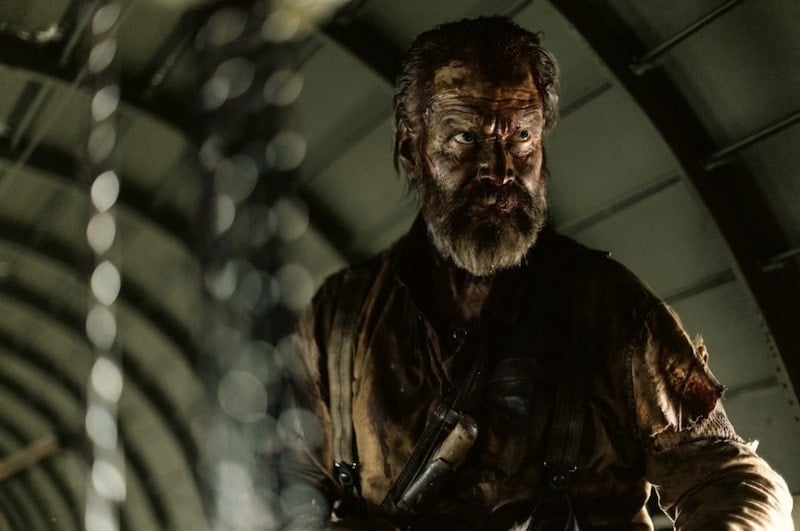 In his introductory remarks, Jalmari Helander describe Sisu like the best thing he’s ever done. And indeed, the eight-year gap between Big game and the Finnish director’s latest film was well worth the wait. Sisu even surpasses Helander’s Christmas horror cult, Rare exportswho as a fan of this film, says something.

Sisu takes place in 1944 in the Lapland region of northern Finland. The beautiful but barren tundra offers few places to flee (let alone hide) from the Nazi hordes who have been ordered out of the country. As swastika-adorned tanks advance, deploying scorched-earth tactics as they go, a lone man (Jorma Tommila), our hero Aatami Korpi, in search of gold, indifferent if not totally disinterested in the world war that is taking place around him. By chance and skill, Korpi discovers an immense underground vein with incalculable riches. Loading his saddlebags with heaps and heaps of glittering ore, Korpi sets out on his journey to the city.

Along the way, the prospector comes across a squad of Nazis led by the oddly Teutonic Obersturmführer Bruno Helldorf (Aksel Hennie). Seeing riches as their last chance to escape the hangman’s noose that awaited them in Berlin, the soldiers set out to kill what is surely geriatric easy prey. Unfortunately for the Nazis and very fortunately for us, Korpi is actually a one-man death squad: a nationally renowned killer who is not invincible but who simply refuses to die. Thus begins a truly unfair fight between the deadliest and most stubborn man of all time and a group of greedy soldiers who soon realize that they are royally and irreversibly screwed.

When Mad Max: Fury Road came out, many (myself included) were inclined to compare the film’s reliance on visual storytelling and action sets rather than dialogue to silent film. Sisu takes the “fewer words, more action” philosophy to a whole new level. Nobody speaks in this 90-minute film before forty minutes. Our grizzled protagonist barely grunts for the duration of the film. In place, Sisu weaponizes a fiendishly visceral combination of sound design and visual storytelling. We only need one look at Korpi’s crudely scarred scars (one of which extends from his collarbone to his groin) to get an idea of ​​the punishment his boob is capable of enduring. .

The exquisite clarity of cracking bones, furious machinery and improvised weaponry says much, much more than any horrified exclamation ever could (e.g. “oh my god, is that a landmine sailing through the tunes?” or “how in the name of God does he stay underwater for so long, we better send more men!). Similarly, the score by Juri Seppä and Tuomas Wäinölä, which s strongly relies on throat singing and guttural percussion, clearly shows what kind of film we are in and what the mood is.

Whereas Sisu could arguably cut a little fat here and there, the film’s overall trajectory (jumping from one carnage-filled setting to the next) is delightful. Like many of its peers ⁠—including first bloodwhose influence is undeniable ⁠— Sisu is responsible for constantly raising the stakes and the scale of its confrontations. Just when you think the movie’s hook (namely: Korpi’s shocking refusal to stay down) is running out of steam, Helander proves you wrong. I desperately want to describe some of these masterpieces to you, but like most things, these creative, gut-splattered discoveries are best experienced first-hand.

Apart from a useless homophobic joke, really a shame in a film with so little dialogue, and a few little pacing issues (my kingdom for a 70-minute film!), Sisu is a resounding success. Even some of the craziest digital VFX feel at home in a film that never takes itself too seriously. When the third act happens in all its ridiculous glory, the photorealistic rendering is a bit beside the point. To boot, the vast majority of Sisu’s effects work is hands-on. The makeup team, led by Salla Yli-Luopa, did an excellent job of making every bullet hole, puncture wound, and skin tear visceral and painful; an important job when the film relies on Korpi’s relentless ability to rise above hurt to get what’s his.

Helander has effectively crossed a number of stalwarts of the genre, from Sergio Leone to 1980s no-budget survivalism, with his own Finnish flair. Relentlessly brutal and surprisingly hilarious, Sisu is a hoot, a howl, and the most fun you can have watching the Nazis get utterly destroyed by a former military grandfather in search of gold.

Meg Shields is the humble farm boy of your dreams and a senior contributor to Film School Rejects. She currently directs three columns at FSR: The Queue, How’d They Do That? and Horroscope. She is also a curator for One Perfect Shot and a freelance writer for hire. Meg can be found screaming about John Boorman’s “Excalibur” on Twitter here: @TheWorstNun. (She she).

Lots of choices, but which game console do Montanese prefer?

Expert Mailbag: John Pandol exposes myth that Europe is ‘ahead of us’ on climate change, challenges IFPA leadership to ‘autopsy disasters’