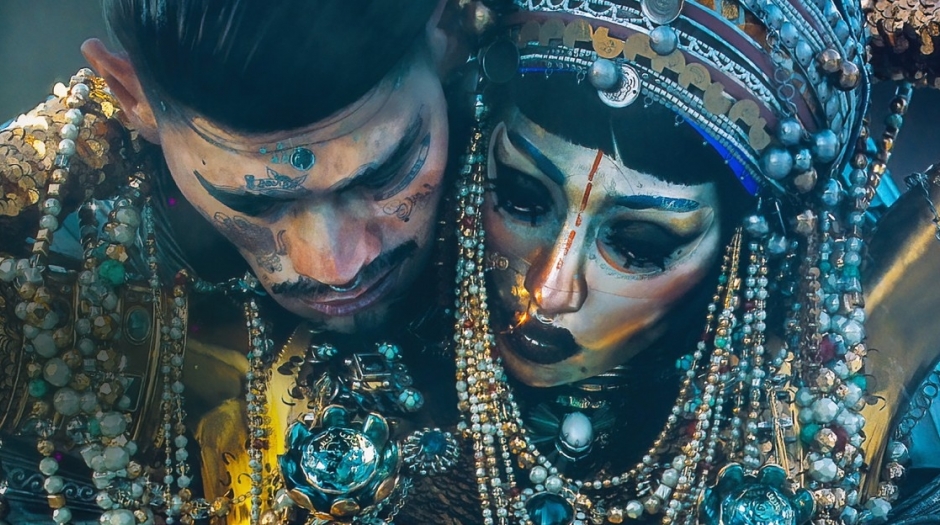 In his 1920 essay “Beyond the Pleasure Principle”, Sigmund Freud explains the human need for destruction, which he calls “Todestrieb” or “death drive”. This death drive dominates nearly every story in Season 3 of Love, Death + RobotsNetflix’s anthology of animated shorts, which uses every trick in the book to explore our primal fear of death, whether through the use of disturbing grotesqueness, offbeat humor, visceral action or by inducing a pure rush of adrenaline.

The most disturbing story of all – in the best possible way – is the astonishing story of Alberto Mielgo Jibarō, a spellbinding original ballet about the violent seduction of a deaf conquistador by a gold-adorned mermaid. A deeply impressionistic work of art, this film cements Mielgo’s reputation as a master of shifting viewpoints. No sooner has he erected the conquistador as a hero than he cleverly reverses the roles and demands that we feel sympathy for the Golden Woman, the mysterious mermaid who has just massacred all her comrades.

This ambiguity isn’t the only way Mielgo breaks the mold. Sound and vision merge to create a hallucinatory collision of the senses, but the result is far from chaotic. Meticulous visual detail, combined with a sound design that seamlessly blends audio effects with a dissonant musical score, creates a powerful and ever-changing tapestry of sound and light. Meanwhile, both creatively and technically, the rendering of the Golden Woman herself, with its rattling ornaments and sinuous movements, is nothing short of breathtaking.

Whereas Jibarō is undoubtedly violent, there is nothing gratuitous in bloodshed. The Golden Woman’s destructive urge is part of her nature – a curse that, when lost, brings her inconsolable grief. Likewise, the savagery of lovemaking, where the conquistador and mermaid are seen drawing blood with each fierce kiss, serves to heighten the viewer’s sensory experience. Without a doubt, this film is a subversive masterpiece.

Equally visceral is that of David Fincher bad trip, adapted from the short story by Neal Asher. Through his confident mastery of the cinematic craft – particularly his effortless use of the camera to penetrate three-dimensional space – Fincher composes the tension, dread and claustrophobia aboard a sailboat whose crew is attacked by a “thanapod,” an insect-like sea monster. This is a psychological thriller disguised as a visceral thrill, in its way just as subversive as Jibarōand no less disturbing in its exploration of the dark side of the human soul.

There are more bugs in Swarm, adapted from the story by Bruce Sterling and directed by series creator Tim Miller. Human researchers investigate an alien hive inhabited by multiple castes of insects, in a sci-fi tale that lets Miller and his Blur Studio artists unleash their creativity, evoking a truly dazzling space realm. Like the thanapod in bad trip, a newly evolved intelligent alien is able to communicate by manipulating a human victim. Thus, another of the themes of this season is established – the modest place of man in the vastness of the universe. Nowhere is this idea presented more clearly than in the work of Jerome Chen. In the vaulted halls buried, based on the story by Alan Baxter, in which soldiers encounter a colossal Lovecraftian god in a hidden underground tomb. This particular short is filled with dread from start to finish.

All of the above uses 3D animation techniques to present vividly rendered worlds of the imagination. by Emily Dean The very pulse of the machine, adapted from the story by Michael Swanwick, relies on a more traditional 2D aspect to tell the story of an abandoned astronaut who sinks deeper and deeper into a hallucinatory trance as she roams the surface of Yo. With its trippy images of giant rock formations morphing into female statuary, the film channels French comics Howling metal and the vibrant art of Moebius. Also relying on 2D techniques is Kill Team Kill, directed by Jennifer Yuh Nelson from the story by Justin Coates. Steeped in machismo, its story of a team of green berets battling a rampant cyber-grizzly is a tongue-in-cheek commentary on the love of guns that inevitably leads to annihilation for all.

The theme of mutually assured destruction is carried over into this season’s three comedic offerings – a trio of little gems that put entertainment at the top of the list. At Patrick Osborne Three robots: exit strategies, based on the story by John Scalzi, three robots exploring an abandoned Earth ravaged by conflict are forced to conclude that none of the strategies adopted by the various sectors of human society have succeeded. A final twist brings the ultimate irony to this particular cautionary tale about the struggle between humans and machines.

In Mason’s Rats, directed by Carlos Stevens, adapted from the story by Neal Asher, a Scottish farmer wages war against a gang of super-intelligent rats, to develop a grudging respect for the feisty rodents. As Jibarōthe film delights in flipping the ideas of good and evil, hero and villain, while playing the bloody action strictly for laughs.

Last but not least is Night of the Dead Minis, directed by Robert Bisi and Andy Lyon from a story by Jeff Fowler and Tim Miller. Bold, innovative and witty, this shortest of shorts follows the progress of a zombie apocalypse across the planet through a series of rocking vignettes in which humans and zombies are rendered as microscopic characters seen in super wide angle. Here we find the motif of humanity’s insignificance in the vastness of the universe – an idea humorously underlined in the film’s delightfully anti-climactic finale.

Horrible or funny, magnificent or grotesque, each of the nine films in this final season of Love, Death + Robots resonates all the more strongly when placed in the context of current world events. Whether it’s the war in Ukraine or the ongoing gun debate in the United States, the harsh realities of our life on Earth appear all the more vivid when illuminated by the spotlight of the world. ‘art.

Like all the best sci-fi movies, Love, Death + Robots does more than just transport us to other worlds. It sheds new light on our own daily lives – and in particular the all-pervading reality of death. In doing so, he enriches our minds and souls, and thus ultimately reminds us of what it is to be human.

Dr. Maria Elena Gutierrez is CEO and Executive Director of VIEW Conference, Italy’s premier annual digital media conference. She holds a Ph.D. from Stanford University and a BA from the University of California, Santa Cruz. VIEW Conference is committed to bringing a diversity of voices to the fore in animation, visual effects and games. For more information on the VIEW 2021 events program, visit the official website: http://viewconference.it.