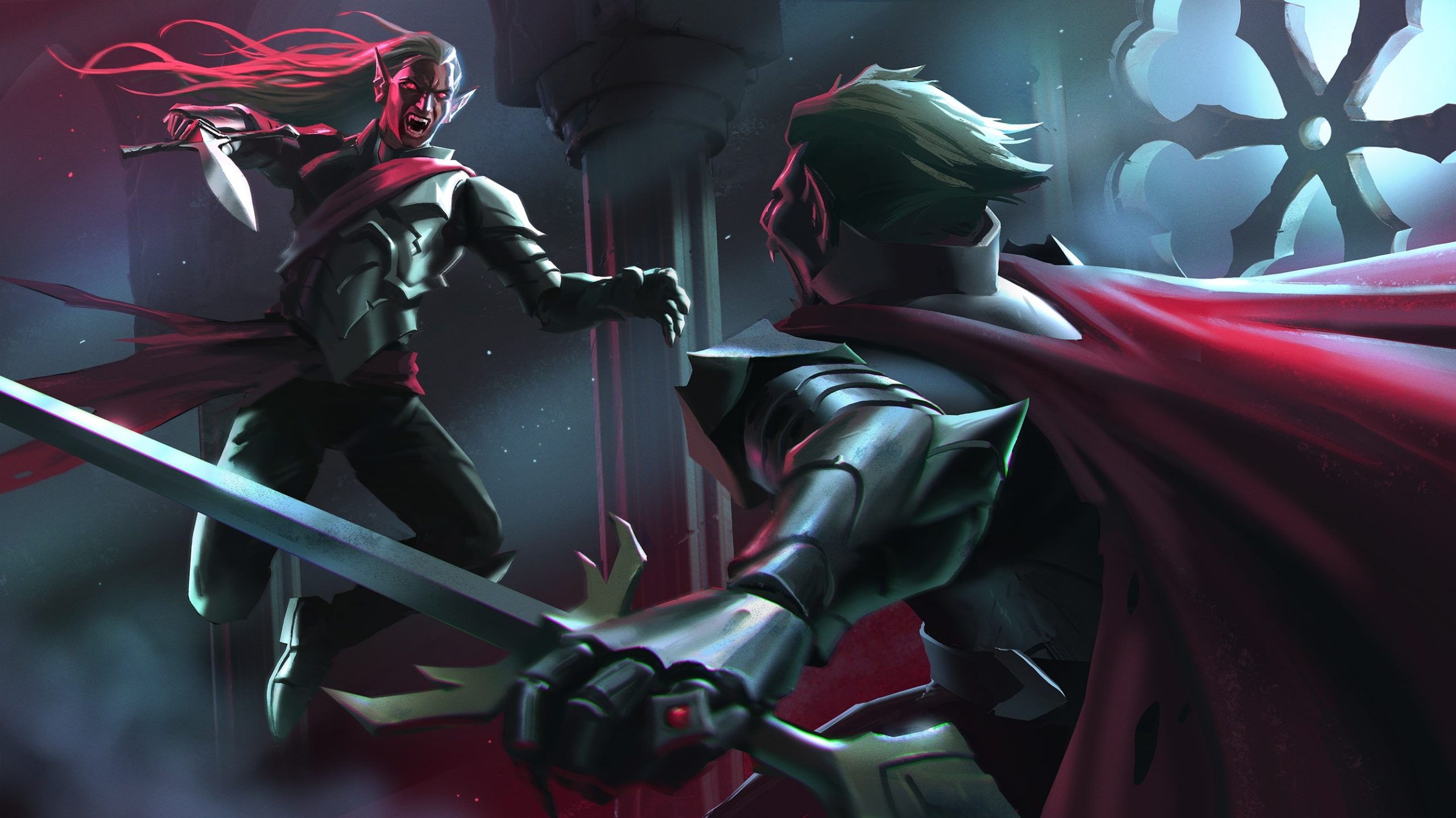 A year and a half after Valheim entered early access on Steam, it’s time for another survival game to conquer its assault charts. V Rising is a PC-exclusive isometric vampire RPG; it’s cute, cheap, accessible and addictive. It’s less rough around the edges than Valheim was at the time but still suffers from significant imbalances. More importantly, V Rising is more suited to cooperative gameplay, both in the PVE and PVP sense. Valheim was a loner’s dream, but this one, at some point, becomes difficult if you avoid the company of others.

In V Rising, you are a member of an ancient civilization of vampires, driven out eons ago by humans. The great revival is now near, and you must do your part in the resurgence. The game looks and controls like most isometric ARPGs, except base building is the essential part of progression. Survivalism is, for the moment, implemented quite “lightly”. Besides feeding on animals or humans in order to replenish the blood supply, there is nothing more.

The early hours of V Rising provide a straightforward experience. You will mainly farm the basics for the first levels of your housing. There is a quest system in place that walks you step by step through building your castle and starting gear. The progression is linear, so you will be required to follow these quests to the letter to progress. You’ll fight bandits, skeletons, wolves, bears, and other entry-level enemies, slowly unlocking the best goodies.

The game will soon introduce bosses, an essential element for most unlocks. Each boss unlocks something new and intrinsically tied to gear, abilities, and inventory progression. These bosses far outnumber a handful of Valheim, and the degree of challenge they present is also more progressive. The former will be a breeze; the latter will test both your skills and your nerves. The difficulty will always be exacerbated because you cannot equip most bosses. Better gear and spells are always tied to defeating them.

Apart from fighting, resource management and base building will take up most of your time. Depending on the server type (PVP or PVE), your buildings and possessions will be safe or up for grabs. The game itself recommends playing with three or four other people if you don’t like being ganked and/or robbed. But even on the PVE server, you must maintain your possession by putting blood essence in your castle’s hearth to prevent it from decaying. This essence is a by-product of food, so you will always have a large surplus.

The sun is trying to kill me

The sun is deadly to vampires, of course. This well-known fact is a major gameplay concern in V Rising. The clock ticks slowly during the 24 hour period, and nine hours of daylight is followed by fifteen hours of soft, gentle darkness. You can move around during the day, provided you go between shadows, trying to minimize exposure to the sun. You don’t get burned right away, because you’re allowed a second or two of immunity before the rays start sizzling your pale flesh. But combat, even with low-level enemies, is a major drag in a sunny environment. Even going AFK outdoors is pretty much out of the question, as the shadows change over the hours. The beautiful shade under the large oak tree gradually becomes exposed to the sun, so if you go any further than a piss, you’ll be back to a charred corpse. An exciting and well thought out concept that is nonetheless irritating.

When night finally falls, you’ll breathe a sigh of relief or, IDK, execute a vampire equivalent of it. On an average night, you won’t get any particular benefits – reduced vision in human enemies, for example, would be reasonable. Only during the Blood Moon, which happens from time to time, will you move faster and have lower ability cooldowns.

Not really suitable for lone wolves

V Rising has just entered Early Access, so managed expectations should take precedence over angrily pointing out its flaws. But one particular problem definitely requires a quick fix – totally closed progression. Progressing through the game is all about killing bosses and drinking their blood, which unlocks pretty much everything. It’s fine in theory, but…

But around LVL 30-33 gear I hit the brick wall. Clive the Firestarter, who was supposed to unlock the explosives needed to clear the way for Bandit King and the Iron Weapons, proved almost insurmountable. The fight with Clive takes place in the Brimstone Quarry with crowds around every corner, who have been drawn into the fight due to his erratic maneuvers. I tried to spend the night cleaning each group, but after fiddling with my thumbs during the day, the respawn timer kicked in. So with each new assassination attempt on old Clive, the mobs gradually reappeared and I was overwhelmed. Many times.

I could have grouped with another player, but that would conflict with my vampiric loneliness wow. So I had invested half a (real) day fine-tuning my tactics until I finally got it. And then I realized that between two attempts, I had spent at least two hours camping in the shadows, waiting for nightfall, turning the podcast on and off on my mobile. Fuck that.

Since we have all recently suffered from a pandemic, it is reasonable to assume that almost no one likes a forced confinement. Personally, I don’t know any vampires, so I can’t vouch for their preference, but I guess they feel the same way about being confined to daylight. But what if 1/3 of the game is sitting on your ass and waiting? Will you accept the downside (logic) or give up? I guess that’s the second big thing developers need to tackle if they want to keep the tremendous business momentum going. V Rising can become the second Valheim if it stops being very troublesome.

Preparation for death – is this the new craze that will result in a cult or is it overkill?