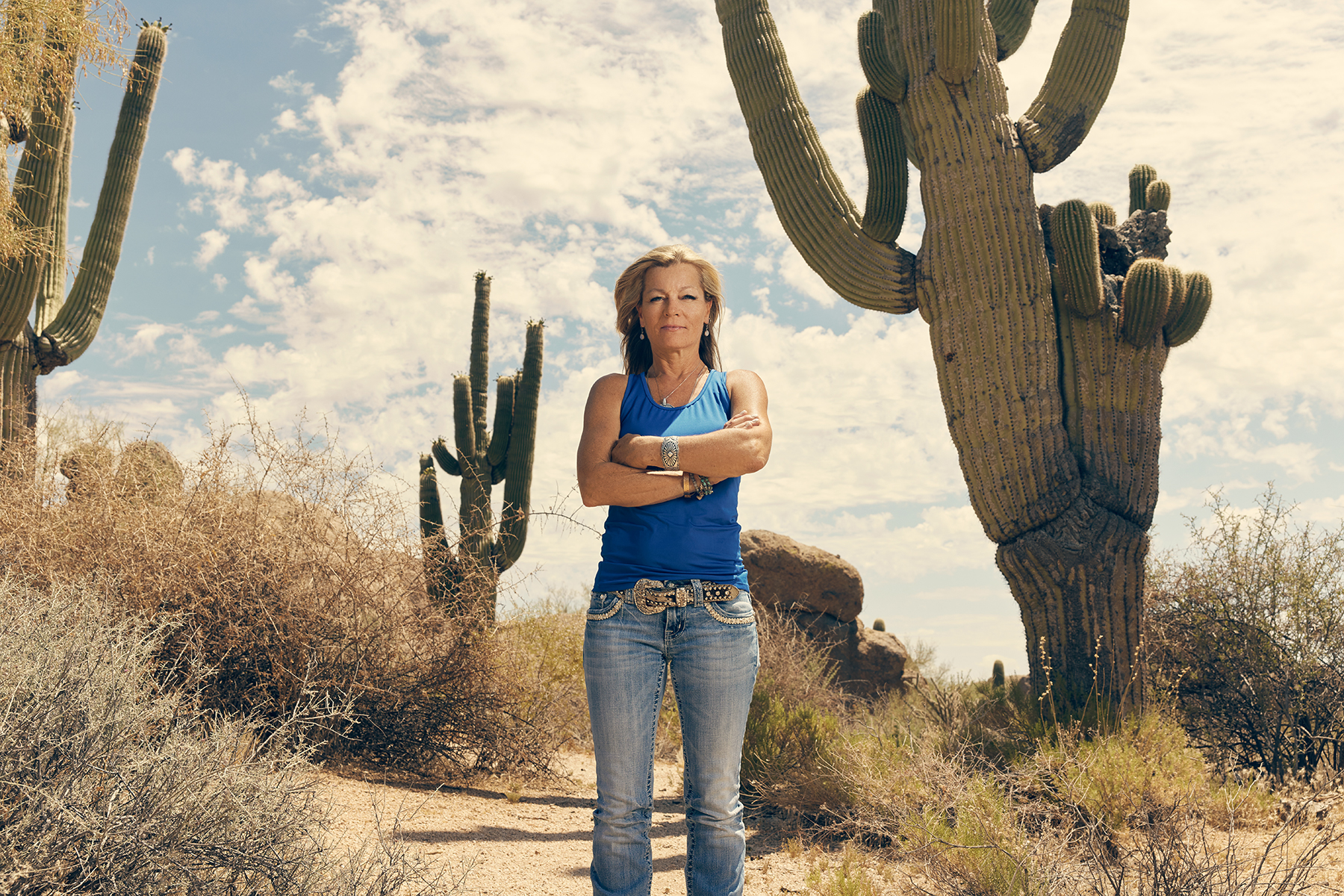 She was a mother of two who had gone from cocktail waitress to dancer paying the bills. The daughter of a cop who had always dreamed of fighting crime. And, for four and a half years, a confidential informant who helped the feds bring down a white supremacist behind a 2004 bombing in Scottsdale, Ariz., that maimed a black man — and who intended to do much worse.

Now in an exclusive interview with journalist Jeff Maysh on Substack, Rebecca Williams reveals her true identity and tells the crazy story of her recruitment by the ATF and the sting operation that could have cost her her life. Williams went undercover for the ATF between January 2005 and June 2009, Maysh details, often working alone and without formal training. First, she bonded with twin brothers Dennis and Daniel Mahon, members of the KKK and White Aryan Resistance who, according to a former ATF agent, “may be the greatest serial bombers ever. never lived in this country”. Later, his master expanded his investigation to have him meet Robert Joos, a religious fanatic who ran a bizarre church and extremist camp filled with illegal weapons in faraway Missouri, who had been an adviser to the Mahons.

Williams first met federal agents through his brother Phillip, a career criminal who had agreed to infiltrate the Hells Angels after selling drugs to an undercover agent. During a routine visit, Phillip’s manager noticed Rebecca and asked if she would be interested in undercover work. “It sounded cool at the time,” she tells Maysh, “and I guess it was kind of sexy, you know, the whole spy game.” Maysh describes Williams’ first meeting with ATF Special Agent Tristan Moreland at the bureau’s Phoenix office in January 2005:

Moreland scanned her. “She’s lived a little through life, she’s got a lot of street smarts and she runs with tough crowds,” he recalled thinking. She had an edge and would be believable, he concluded. When he told Rebecca there had been a bombing that seriously injured a black man, she was intrigued. “They said they needed me to go talk to a few guys and have it all recorded. They said I could make up to $100,000.

Moreland had shown her pictures of Dennis and Daniel Mahon, but warned her not to look at them. Naturally, Rebecca started digging. Dennis Mahon was “one of the scariest guys around” in the 1990s, according to the Southern Poverty Law Center, which tracks hate groups.

A day later, she called Moreland again. She would.

Williams was given a cover story—her name was Becca Stephens, and she was on the run after a failed bombing attempt—and a trailer fitted with a Confederate flag. She parked next to the Mahons at an RV camp in Arizona and immediately struck up a friendship. During their first conversation over beers and sips of Everclear at 190 ordeal, Dennis told him that he was a Great Dragon of the KKK, showing a photo of him wearing the ceremonial green balaclava and another in which he gave the Nazi salute. He also gave her his copy of Turner’s Diaries, a novel about a race war that inspired Oklahoma City bomber Timothy McVeigh. “He talked a lot about overthrowing the government with an underground revolutionary war,” Williams told Maysh. Maysh continues:

Daniel bragged about shooting at the wheel and blowing up cars, according to transcripts of the secret recordings later heard in court. “We thought we were doing the right thing. We were just trying to send a message,” he told Rebecca. “When I pulled out someone’s car, it wasn’t out of anger. It was a sense of duty. It’s like a military operation. You plan for it. Equip yourself for it.

Rebecca, hoping to captivate men in the way [her alter ego] “Stevie” made customers at the strip club, remained silent, even distant. Dennis was hit. “I just want to cuddle with you. You’re so beautiful,” he told her, but as the night wore on, Rebecca made it clear that she wanted to go to bed — alone. maybe one day,” she teased before pointing him out the door. Hidden microphones recorded Rebecca as she crawled into bed.

Less than a month after their friendship, Maysh says, Dennis had promised to introduce Williams to Joos – who investigators later learned was the first person Mahon had called after the Scottsdale bombing. The brothers also took her to a local gun show, looking for everything she would need to make a bomb under their tutelage. While they were shopping, she asked Dennis if he had done any successful bombs. As Maysh describes it:

He leaned closer and whispered, “Yeah, the fucking diversity officer…Scottsdale Police Department, got his fingers ripped off.” Then he caught himself and said he told ‘white cops how to do it’. She had obtained her confession.

While Williams thought her job was done, the ATF was too intrigued by the idea of ​​Joos and her training camp to let her go. They enticed her with a raise. She deepened her relationship with the Mahons, visiting them periodically and becoming pen pals over the next few years with Dennis, who eventually arranged a meeting between her and Joos in January 2008:

There was a dusting of snow on the road as Rebecca drove a rental car through the Ozarks, following a map of the 200-acre church grounds of Joos near Powell, Missouri (population: 49 ). The church had registered a logo consisting of two capital “N”s side by side, which resembled the lightning bolts of the Nazi “SS” logo. Rebecca met Moreland for a roadside briefing. He had bad news. Due to the remoteness, surveillance was impossible. She entered alone. No backup.

After Rebecca drives [through a large gate, Joos] locked him behind them. They drove through a graveyard of broken down vehicles, while stray cats meowed and dogs howled. Inside ramshackle buildings, Rebecca noticed several long guns, and as they walked among the walnut trees, Joos discussed survivalism and conspiracy theories. As casually as someone on a YouTube cooking channel, he taught her how to make napalm out of household soap.

Joos led her deeper into the woods, showing her distant caves where he hid supplies. “He said if he found out someone was trying to infiltrate them, they would disappear,” she recalled. When it was time to leave and Joos opened the padlock and said goodbye, she was relieved. “Hope I didn’t scare you too much,” he wrote in a letter shortly after leaving. “I know Dennis would really like you to be part of what we’re developing here.”

Williams with government agents posing as white supremacists during a photo op in the desert.

Over the next year and a half, Williams continued to gather information and evidence for the ATF through her relationship with an increasingly suspicious Dennis Mahon, parrying his fears that she was a “plant” by returning paranoia to him. Finally, at 7:00 am on June 25, 2009, the bureau invaded the Mahon’s home and arrested the brothers. When Moreland, who had also gone undercover at the end of the operation, handcuffed Dennis, Maysh recounts, the terrorist said, “We knew. We knew… you and the girl. We knew.”

Thanks in large part to Williams’ work, Dennis Mahon was convicted of three counts related to the Scottsdale bombing and sentenced to 40 years in prison. Joos was sentenced to 78 months for possession of illegal firearms. (Daniel Mahon was tried but not convicted of any crime.) The ATF recommended that Williams participate in the witness relocation program, but she refused to be a “sitting duck,” as she told Maysh. She now lives off the grid in a house bought with her ATF money. But she hasn’t lost her thirst for crime-fighting adventures: She’s currently working independently on solving a local cold case.