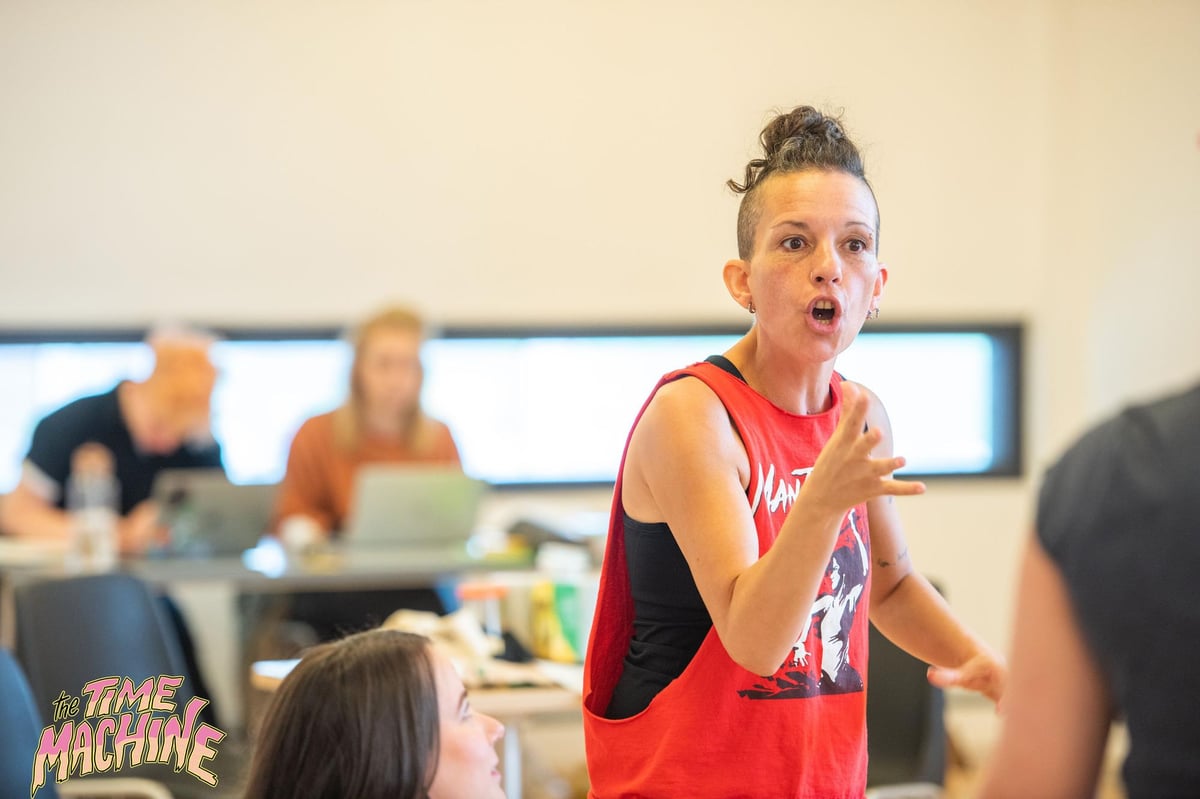 Jordan & Skinner on their feminist narrative of The Time Machine

HG Wells was a visionary. It was not only that his 1895 short story brought the phrase “time machine” into parlance, it was also that his imagined future identified the flaw in early capitalist thought.

The time machine takes us to the year 802,701, when the human race split into two factions. Above ground live the Eloi, a tribe of small stature and naive outlook, living a life of ease. Underground are the Morlocks, an unfortunate race of workers, who feed and clothe the Eloi. It is the class system pushed to its logical limit.

In today’s age of haves and have-nots, where the rich get tax cuts and the poor wonder how to pay their bills, his book seems all the more prescient. “It’s really scary,” says actress Melanie Jordan. “We meet these two species when the Morlocks begin to revolt and eat the Eloi. Humans eat each other – it’s awful. We started looking at this a few years ago when Brexit was a thing and Trump was in power and for the first time the future looked doomsday. The more time passed, the more the book felt true.

But like all of us, Wells was a man of his time. Reading the book today, Jordan sees something obvious that would not have occurred to the author: “It is important to say that the story of HG Wells is all male.

That’s why when she and theater director Caitlin Skinner, her collaborator in the feminist theater company Jordan and Skinner, started thinking about The Time Machine in 2017, they were at odds. On the one hand, this was a pioneering fiction, as radical in its ambition as in its politics. On the other hand, it was a book that did not reflect their experience as women of the 21st century.

“The book is about wealthy Victorian men who are excited about the future, the Industrial Revolution and human progress,” says Jordan. “It’s interesting for us to think about how their ideal future compares to a feminist utopian future.”

Their conflicting reactions to the book spawned The Time Machine: A Feminist Retelling, in which a group of survivalists take refuge in a bunker, fearing an impending apocalypse. The idea is not fanciful: In the real world, feminist “preppers” are preparing for a societal collapse that they believe will hit women and other marginalized groups the hardest.

“Characters try to balance their feelings of doom and despair about the future with hope and agency in their ability to change things,” says Skinner, who is also art director of Stellar Quines.

Jordan and Skinner see the theater itself as a time machine in that its meaning changes as the world around it changes. “In theater, it’s always today, it’s always now, and it only exists when the audience sees it,” says Skinner, describing how ideas that once seemed comical and outrageous now feel almost mainstream. “When we started creating these characters, they felt like extremists. It was easy to make fun of them for taking things to the next level. We didn’t feel like that. In 2022, after having been through all we’ve been through, we challenge our own feelings of despair – and we laugh at it.

It’s a sign of the company’s playful nature that the four actors, including Jordan herself, play multiple roles and each take turns playing the role of the time traveler. They also have fun exploring the distinctive movement styles of Eloi and Morlocks. Jordan and Skinner have important questions to ask, but they don’t take themselves too seriously.

“All the work that Caitlin and I do comes from a place of anger,” says Jordan, whose work with Skinner includes the Scotsman Fringe First-winning Sanitize (2014), At A Stretch (2017) and A Brief History Of The Fragile Male Ego (2019). “It’s something that gets on our nerves and we find fun ways to deal with it. Our whole job is to joyfully vent our anger.

This is the company’s largest scale work to date and they appreciate getting everyone’s input as they design it. “There’s no script that everyone can jump in and work on, so it has to be really collaborative,” Skinner says. “When you do something political, it helps because you get a wide range of perspectives, experiences and points of view. It makes everything richer – and it prevents us from doing propaganda.

“Political debate is just as important as physical exploration,” explains Jordan, trained at the Ecole Philippe Gaulier and specializing in clowning. “We pretty much anticipated what they would do, but the performers color it a lot with their own art, opinions, and feminist struggles.”

For all that, the two remain in awe of Wells’ achievement, with their show being as much a celebration of the news as it is a 21st century update. “HG Wells was trying to comment on capitalism,” Jordan says. “He was saying, ‘Look at everyone – if we keep going, we’re going to have this split’ and warning his fellow early capitalists. He was responding to his current situation and we are responding to our current situation. Victorians were striving in the name of progress, which at the time was a very cool thing. We now know that industrial progress has burned the planet. We need to change what progress means without discarding everything that has already happened.

The Time Machine: A Feminist Retelling is at Platform, Easterhouse, October 7-8 and on tour until November 9.