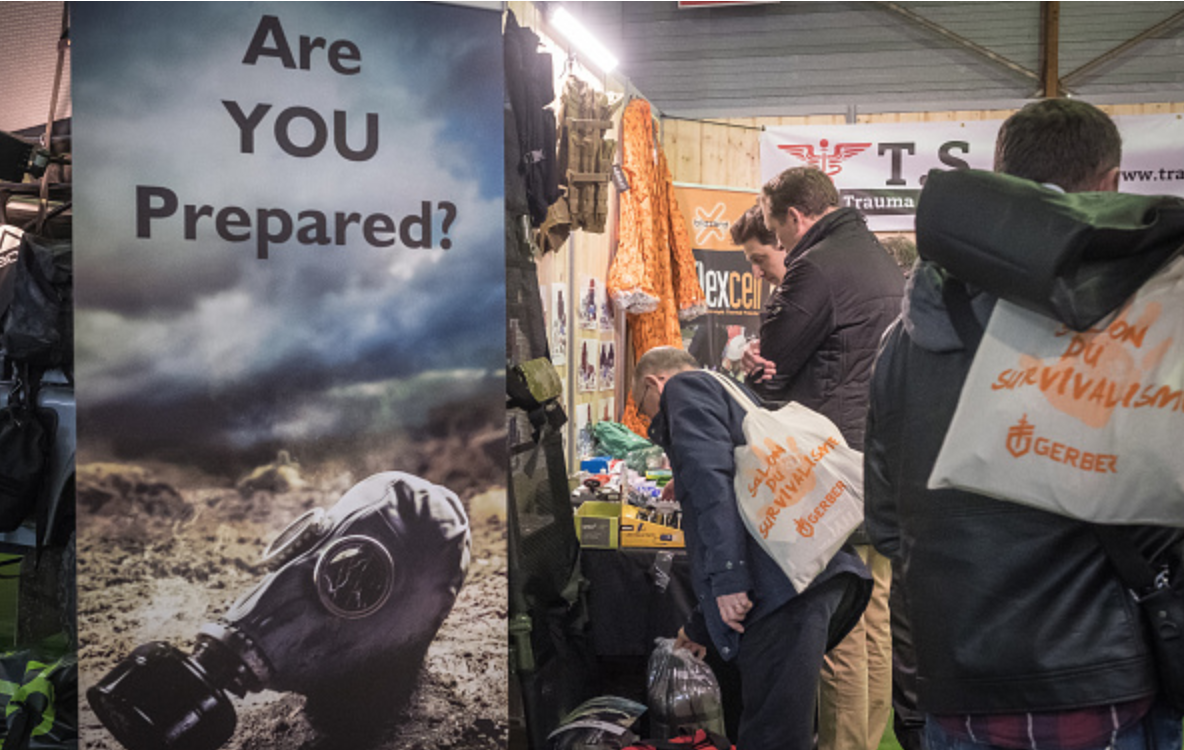 If preparing for the apocalypse has taught me anything, it’s that we can’t survive alone – Waging Nonviolence

Sometimes in second-hand book stores, I find myself with an armful of books, thinking “These will be useful if… If the internet goes out, if there’s no electricity, if there are no more grocery stories.” I cling to the books, push the nightmare scenarios out of my head, and head for the cashier.

I think I can mark the beginning of this strange coping mechanism with Donald Trump taking the highest office in the United States. I dealt with my discomfort and my dismay – my anger and my fear – by collecting books that helped me feel in control. I couldn’t control who was in the White House or how the world viewed America, but I could grow a garden, raise chickens, and dig a root cellar. True Confessions: I’ve expanded my garden and added six adorable feathered friends, but I haven’t dug a root cellar yet. I know exactly where to look when it’s time: “Simple Food for the Good Life: An Alternative Cook Book” by Helen Nearing has an entire section on root cellars for beets, apples, and potatoes.

Books store a kind of knowledge that I’m not quite ready to absorb. Between “The People’s Cookbook,” “What Cooks in Connecticut,” and “The Tuna Cookbook,” I can make pumpkin and watermelon rinds palatable, catch and cook locusts, crickets, and termites, and cook tuna in preserves in over 100 ways.

It wasn’t until I stood in line at the second-hand bookstore with a $1 copy of “How to Build a Secret, Off-the-Grid Home, Far From Government Prying Eyes” that I saw my behavior clearly. I sought to soothe my anxiety about everything from rising fascism to rising sea levels, fuel cost spikes and the lingering pandemic by buying books. I don’t read the books, mind you, I just buy them. They stack like the MREs a doomsday prepper might stock his bunker with. I find comforting in their pages full of unlearned lessons.

I imagine the sirens signaling a meltdown at the nuclear plant down the street, or the storm surge hitting the house, as I frantically stuff Tom Brown’s “Field Guide to City and Suburban Survival” into my bag next to the “Complete Worst Case Scenario”. Survival Manual. Seriously, I bought these two books on the same day. The “Worst Case” book tells you how to survive an alligator attack and a plummeting elevator. Meanwhile, the three “Foxfire” books I have (there are 14 in the series) share the knowledge and skills of Appalachians, including entries on churning butter, making bootleg liquor, foraging for mushrooms, and dressing pigs. So maybe it would be better to bring them!

Call it an insurance policy or a bibliotherapy or maybe a vain illusion, but it’s much cheaper than buying in the survival condowhich is built inside a disused missile silo in Kansas.

Survivalist and educator Tom Brown notes that “for our ancestors, every day was an uncertain struggle. Survival was a way of life. Today, our instincts are dulled and our knowledge of survival has faded like fumes from a steam engine. Most of us have traded our natural heritage for comfort and convenience. My ancestors would have no problem trapping, killing, and dressing up a squirrel — and by dress, I don’t mean putting it in cute little outfits and taking pictures for Instagram. I mean separating the fur, skin and bones from the meat and preparing it for consumption. I look at the squirrels in our yard – the grease from raiding our compost pile and chicken feed – and wonder if I could really do this. If things go wrong, will I be able to consider the squirrels in my neighborhood as a food source?

We cannot survive alone, or only with our immediate families, no matter how many skills and resources we possess. We have to figure out how to live together and take care of each other.

Instead of “if”, I should say “when things kick in”, because Doomsday is already here for a lot of people. Many of us are insulated from the worst by wealth, skin color, nationality, or geography, but it’s still there. I don’t have to look far to see a series of horrible calamities that many people did not survive. There are the hellscapes of California and Colorado, where fires have destroyed millions of acres and killed dozens. There is the much less drastic but horrific Bronx apartment fire, which killed 17 people. The February 2021 cold snap in Texas killed more than 200 people, destroyed infrastructure and crops and left millions of people in the dark and cold for weeks. Just under a year later, a dusting of snow following a rainstorm shut down one of the country’s busiest highways, stranding tens of thousands of people for more than 24 hours.

These are all different crises, distant in time and geographically. But, for me, they add up to fear and a sense of apprehension. Futurist Alex Steffen defines discontinuity like the “shock that comes with recognizing that you are unprepared for what has already happened”. Yeah. Whether it’s in a yurt on a blazing hill in California, a condo in Houston, or a clumsy Toyota miles from an exit on I-95 in Virginia, I’m not prepared. I am also unprepared for many other things that are already happening to my fellow human beings in this country and around the world.

– I’m careful.– I’m not disgusted and I have a high threshold for “magnification”.– I can grow food.– I can dive into garbage cans and eat garbage.– I can handle discomfort and prepare for heat and cold.– I can lead a meeting and help a group reach consensus.– I can wait, I’m patient.– I am empathetic.– I fasted for periods of a week or 10 days, so I understand that my body can continue to function with little or no food.– I can walk long distances and have run half marathons, so I feel like I can travel on foot.

That doesn’t seem like a very good list. There are a lot of holes here. I can’t speak another language. I don’t have a skill like engineering, chemistry or medicine. I don’t know how to trap and kill a wild animal or prepare it to eat. Really, all I have is common sense, caring for others, and a rudimentary sense of how natural systems work.

I can’t really prepare for the apocalypse or prevent it entirely, but we can integrate the reality of these changes into our lived realities – by resisting despair and being generous, and by building resilience and solidarity.

But maybe that’s enough, now that I think about it. We cannot survive alone, or only with our immediate families, no matter how many skills and resources we possess. We have to figure out how to live together and take care of each other. Basic stuff, no matter where we are. So my little set of survival skills can be stacked alongside yours and theirs, and I’ll develop my own (leaving squirrel culling until the very end), while weaving a tighter web of mutual aid and community concern. With all this I can now count Rob Hoskins“From What’s to What If: Unleashing the Power of Imagination to Create the Future We Want” as part of my Survival Bookshelf, alongside everything by Octavia Butler and Ursule LeGuin.

There is a strong tendency within survivalism to separate from a failing or failed society. Mountaintop retreats, private islands, repurposed bunkers, and the billionaires’ space race aim to secure a future for very few.

Retirement doesn’t interest me. I’m interested in resistance which also creates resilience and restoration, and I am not alone in that. Around the world – while working to hold nation states and corporations accountable for environmental pollution and destruction – groups are building systems care, repair and resilience that resist the desperation and nihilism that can seep (or splash or tsunami) into the work.

Zombies, aliens, invaders, ice storms, deadly rain, computer viruses, real viruses – those nightmarish images are in my head all the time and probably fueled my book binge more than anything. The terror-driven business as entertainment aggravates in me a very real helplessness and desperation, which easily turns into crippling apathy and vigorous nihilism. I never come out of a “Walking Dead” feeling empowered or equipped for the post-apocalypse. Damn, I don’t even feel ready for tomorrow.

But the truth is that the apocalypse doesn’t come all at once, in a tidal wave or a new strain of disease. It won’t be cinematic, and there won’t be any last-minute soundtracks or technical fixes. We live in a time of change — climate change, economic change, political change. These constant micro and macro upheavals are random, non-linear and in flux. They are also persistent, plottable and pervasive.

I can’t really prepare for it or completely prevent it, but we can integrate the reality of these changes into our lived realities – by resisting despair and being generous, and by building resilience and solidarity. It all sounds like a huge privilege. I don’t want to prepare the end of the world. I want to prepare for tomorrow, and I don’t want to do it alone. I want to do this with you, my family, our community, and a few other people who know a little more about how things work than I do. Tomorrow is definitely coming and that’s all we really know about it.