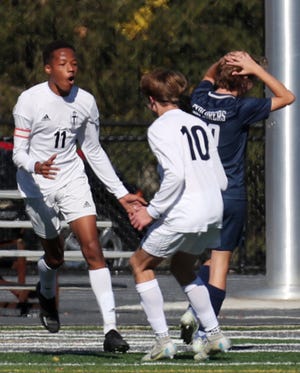 The top-seeded Explorers played in their ninth straight district final and reached the knockout stages for the third straight season and sixth in the past nine years on Saturday at Nordonia.

“It’s really tough every year,” Explorers coach Steve Knapp said. “Having been there before and having won, I think those kids have a little bit of an advantage, so that helps, but no, it never gets old.”

DJ Ashe scored twice and Gavin Mertes had a goal and an assist for the Explorers.

The sixth-seeded Warriors won a district final for the first time since 2010 and did so by blowing some hearts out of Solon.

The third-seeded Preppers (12-6-1) took a 1-0 lead on a goal from Aiden Ptacek, but Andrew Conti netted a pass from Xavier Munro in the 49th minute to level the score.

It stayed that way until Brady Catanzarite ended it at 1:48 into the extra session to push Walsh to another week.

“It means a lot in that it’s been a process over the past three years since I came back,” Warriors coach Tony Catanzarite said. “We kept building with a long-term vision in mind. We’re not trying to win a game here or there. We’re trying to put the program on a long-term trajectory.”

The top-seeded Minutemen (17-1-1) won their ninth district title in the last 15 years and reached the knockout stages for the third straight year and they did it with speed, precision and incredible skill at Nordonia.

Revere will move to Bowling Green (11-7-2) after the Bobcats beat Delta 1-0 in overtime. This regional semi-final will take place on Wednesday in Huron.

“As it goes on and you look at how many times we’ve been able to get to this point, it’s really meaningful every time because it’s really hard to do,” Revere coach Nick DePompei said. “We try to make sure that we meet that expectation. There’s a sign in our locker room that says “Minutemen live for November.” We want to perform in the biggest show.

Against fifth-seeded Lake Catholic (14-3-2), it was just too many squads as Ryan Brown put the Minutemen in the scoring column before Ryan Hodgson made it 2-0 .

Jaden Yankovitz, AJ Catlett and Ethan Hodgson completed the scoring for Revere, who outscored opponents 34-2 over the last seven games.

Some things don’t change. The third-seeded Bees (13-3-3) won their eighth consecutive district title and did so by scoring three first-half goals against the sixth-seeded Blue Devils (11-7 -2) in Strongsville.

“It was a big win today,” Medina coach Doug Coreno said. “They say it’s hard to beat a good team twice in a season and Brunswick are certainly a quality team, so winning the district by beating a rival, and doing it in a pretty dominant way certainly means a lot.”

Cam VanNatta and Kostas Paxos each scored a goal to lead second seed Hoover (15-3-2) to a win over fifth seed Jackson (10-7-2) at Barberton.

The third-seeded Royals (15-2) pressured the fourth-seeded Irishman (12-4-2) for one half until the levee finally broke just as it appeared they could go to overtime at Streetsboro.

Carson Reske stepped in and scored the game winner. He came on with 90 seconds left when a ball was played over the defence.

He won the ball, dribbled and showed composure when it mattered most.

He pushed the CVCA regionally for the first time since 2019 and the third time in the past nine years.

The next step is a semi-final in Strongsville against Bay Village Bay (15-2-3). Bay beat Orrville 3-0 on Saturday.

“It’s a big deal for this group of guys,” said Royals coach Nick Thompson, who graduated from the CVCA in 2007. “I was a player in the early 2000s and that was something we we did every year. “I haven’t been as consistent winning that game and getting into regionals. This is a very big step as we continue to try and move the program forward with this group of players. It’s really exciting to take this step.”

Displaying Our Skeletons by Dina Khapaeva