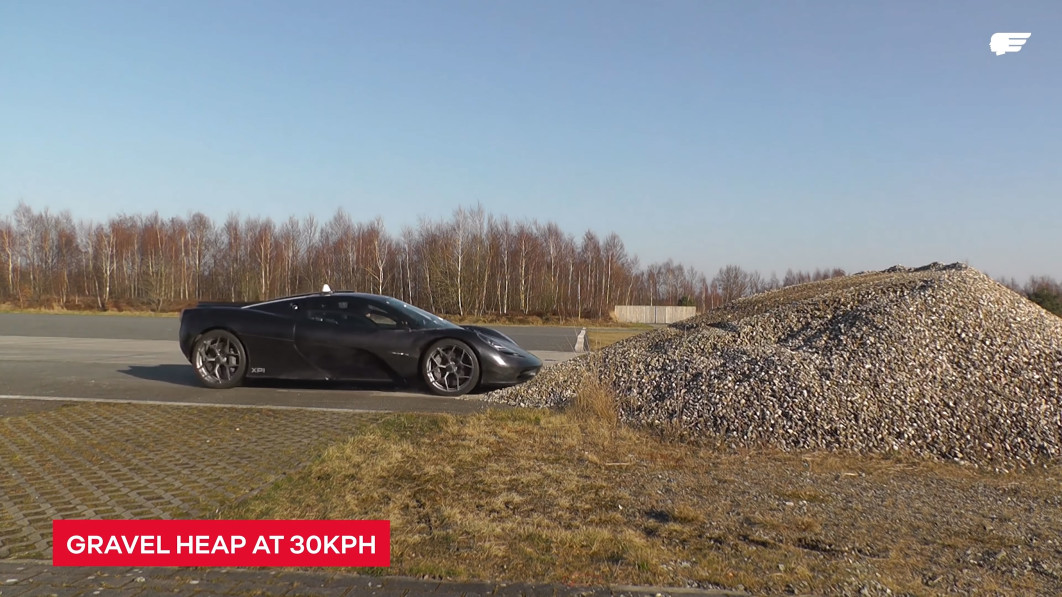 Preparing the Gordon Murray Automotive T.50 for deliveries to customers worldwide means testing its systems and safety like those of an ordinary production car. For GMA, that means bringing the XP1 validation prototype to Automotive Testing Papenburg (ATP) in Germany for a series of torture tests that would be comical if they weren’t so brutal on a real $2.9 million coupe. . As narrator Dario Franchitti explains, a lot of testing is done to make sure airbag deployment systems know how to tell one extreme circumstance from another, so the bag deploys in a crash instead of when the T.50 is thrown into a pile of gravel. Yes, it is real. The T.50 was run nearly 20 miles per hour into — and then up — a seven-foot rock pile. We have no idea what the test is supposed to simulate, but the T.50 passed it, stranding on the ridge, its airbag undeployed.

The other challenges drew a more direct line with real-world driving. There’s a dash at 37mph on Belgian cobbles and another at the same speed on a speed bump, a simulated pothole for “anyone unfortunate enough to drive on British roads” and a mad dash on a fake level crossing. The ramp test sends the 2,173-pound, 654-hp coupe flying off a 10-inch ramp at 43 miles per hour. The steel beam test simulates plowing the wheel face into a curb, this experience breaking a tie rod and damaging a tire. Then there’s a washboard at nearly 50 miles per hour, and finally, plowing a “simulated boar” that weighs 180 pounds.

The man behind the machine clearly hasn’t forgotten how to design fast cars that protect their drivers. If Murray had given the T.50 a little more ground clearance, it might make a decent ride for anyone who knows how to travel really light.