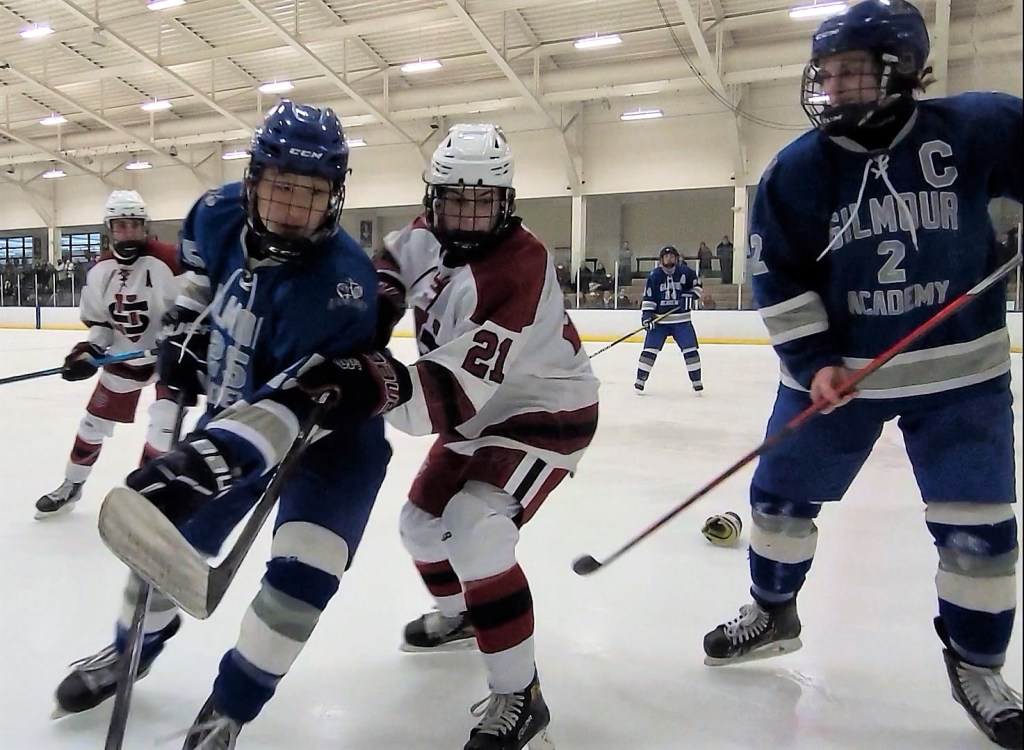 There are usually co-workers who can’t help but tell their co-workers how great their weekend was.

Don’t mind Gilmour if he falls into the same category on January 24.

Because on Jan. 23, the Lancers put an exclamation point on a signature weekend.

Jakub Sedlacik and Matt Bauman scored in the second period, and the shorthanded Lancers took advantage of the opportunity twice late in the third to see a 3-1 victory over their college rival at the Pavilion in Cleveland Heights.

Gilmour edged a 2-1 victory over the frozen four-team Walsh Jesuit return on Jan. 21, recorded a 5-2 win over one of Ohio’s flag bearers at St. Ignatius on Jan. 22 …and oh, by the way, there was a rubber match in SOM’s battle against the school down the road in Hunting Valley.

“I didn’t know what to expect,” Gilmour coach John Malloy said. “Friday’s game was difficult. Walsh, they are tough. Yesterday’s game with St. Ignatius is of course still difficult. We put a lot of energy into it. And I thought our energy level was huge. I think (USA goalkeeper Evan Crawford) was fabulous, and I give that team a lot of credit. They’re a good team, and they’ve had a few injuries.

“They played extremely hard and gave themselves a chance to win. (Lancers goaltender Ian Anderson) came on big when he needed to go big. And that’s what we got. We got strong goalkeepers at the right time. We have a very good group of defenders. We have hard working attackers. These kids work hard.

#NHhockey @GALancerAD Junior striker Matt Bauman discusses 3-1 win over USA
I remember when he had that big goal as a freshman in the Cleveland Cup final against Eds, and we meet again 👍 pic.twitter.com/lezo0VnZ81

The Lancers emerged with a 2-1 lead after two. Sedlacik picked up a Rocco Hice feed from the backboards and buried a look from the left circle at 4:26, and Bauman put in a snapper at 11:05.

“I was just going to the net,” Sedlacik said of his goal. “I got a great pass from Rocco Hice, and I put it in. All we needed was to keep working hard, and it happened. We did not feel comfortable. We continue to work.

“We finally figured out how to play (in the middle of the signature weekend sweep). Be physical, with lots of punches. Get lots of hits. And yes, we scored a lot. It is important.”

Crawford, as Malloy mentioned, was outstanding between the posts on a 31-save night. The senior goaltender kept USA within striking distance deep in the third period with a brilliant 12-save second period as his side were outshot 14-4 with a wide possession disparity of the washer.

The Preppers cheered with their energy out of intermission in the third, starting the period with a breakaway look from Sam Wade early that was cleared away by Anderson (21 saves).

The United States essentially had back-to-back power plays after a pair of stumble penalties, but the Lancers dodged it.

Viktor Povozhaev contributed an empty net with 40 seconds left for the final margin.

Preppers coach Andy Gerow was pleased with his team’s courage throughout.

“We took the lead early in the first, which was big. That’s what we wanted to do,” Gerow said. “We played from behind the two times we faced them. They had a great second half. Evan was just standing on his head. They had some nice finishes there. But it was he who kept us in the game in second.

“Then in the third, I liked our fight. Wade had a breakaway chance, and we had those two late power plays. We just couldn’t get one through. But I liked how we fought in the third, especially with the flurry they fired at us in the second. I’m not getting the result we want, but I loved the fight all the way there.

#NHhockey My post-match analysis of Gilmour’s 3-1 win over USA pic.twitter.com/ZMumo4zyrz

The War on Ordinary People