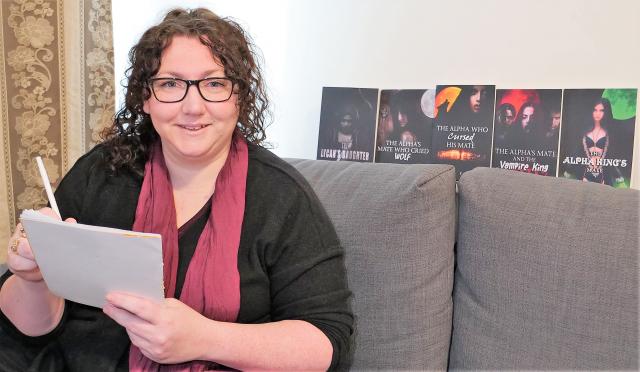 From leaving home at 14 to becoming a popular fiction writer, Jazz Ford just might be the epitome of a rags-to-riches story. Justin Flynn speaks with the Belmont mom of three.

Jazz Ford left home at the age of 14, was a high school dropout, relentlessly bullied, and would later develop anxiety and post-traumatic panic attacks so severe she had to give up her job.

It was a rocky start for the Belmont mom of three. Growing up in Bendigo, Jazz fled her family home and was raised by her grandparents until she was 16 before moving and renting with her brother in Geelong. She says her grandparents are still “amazing” and her grandmother is the nicest person she knows.

But with independence comes responsibility. And the bills never pay themselves.

Jazz was forced to almost beg for a place on a course that would get her certificate three in aged care and community care. She was considered too young, but won the spot and had nine years in the job, which she loved.

But the anxiety and PTSD didn’t stop. Things got so bad that Jazz couldn’t even go to the supermarket without having a panic attack.

Divorce was the next thing to happen in what was already a long list of setbacks.

But one thing that comforted Jazz during her younger years (she’s now 36) was writing.

“I started when I was 14 and moved in with my grandparents and had my little cousins ​​come over regularly and found that I was naturally making up stories on the spot and they want more,” says Jazz.

“It was a really good coping mechanism because I grew up with a lot of trauma.”

But a house fire in her early twenties literally burned down all of her written memoirs.

“I didn’t want to write anymore, I just went through a very depressing stage,” she says.

“I remember thinking I could never write this again, so why bother.”

Jazz remarried and had another daughter, then COVID hit and with it came lockdowns. Many of them.

With her son and two daughters at home, she decides to write again.

“I wasn’t working and I wanted to use my time and I had all these stories in my head for years and I thought I was going to have to start writing them,” she says.

“A paragraph turned into a chapter and it would become another chapter and then an entire book.

“I couldn’t stop and I love it. It made me happier. I rarely have anxiety or panic attacks anymore.

What no one could really predict, however, was just how popular Jazz writing would become. And how fast.

In the 18 months she started writing again, Jazz published nine novels and became a bestseller for one of her publishing houses, as well as top 10 and even number one on many apps. reading.

“Two of my stories even made it to the top 1000 on Kindle among millions of other stories,” she says.

“I’m currently working on the fifth book of a fantasy werewolf series, which is the last book in the series, and I just released ‘The Lycan’s Daughter’, which is the sequel to ‘Alpha Maximus: The Last Lycan’.

“I have an Australia-based zombie apocalypse series I’m working on, as well as other fantastic books and series.”

“Alpha Maximus” has been read almost a million times on a single platform.

“My books are not for the faint-hearted and contain trigger warnings,” Jazz says.

“I look forward to writing my zombie series, which is from the perspective of a little girl surviving and growing up during the apocalypse in Australia, and the many other books I plan to write. over the next two years.”

Jazz now has 11,500 followers on TikTok and now earns enough to support his entire family.

“I make enough money so my husband doesn’t have to work and he’s only 37,” she says.

“We are thinking of buying a house next year because I already have such a large deposit.”

Although Jazz is now very happily married and her husband couldn’t be more supportive, she learns to teach her daughters that sometimes “you just have to be your own hero”.

“My daughters are learning that you don’t need to have a husband or a man to be successful or happy,” she says.

“You can do things yourself. Everyone can be independent. I think I resonate in my books because I had such a tough upbringing and had to be my own hero.

“I write a lot of stories about women or men who have been abused or in a difficult place or shunned and they all end with happy endings.

“I think people just like to read fiction where people have a tough life and go through so much but come out the other side.”

Although things worked out in the end, Jazz has some advice for people who are being picky.

“Reach out and talk to someone, whether it’s your doctor, a friend, or a loved one,” she says.

“When I was first diagnosed with anxiety, I was ashamed and embarrassed. It was a taboo subject. I’ve had enough trouble being bullied at school. school, even by teachers or by my family members, so I felt very ashamed and lost and I remember crying a lot and being really ashamed.

“The best thing I’ve ever done was finally reach out and I’ve been so surprised at how many friends are suffering from anxiety, depression or suicidal thoughts.

“It is more and more common to talk about it. No one should be ashamed or belittled for having a mental illness.