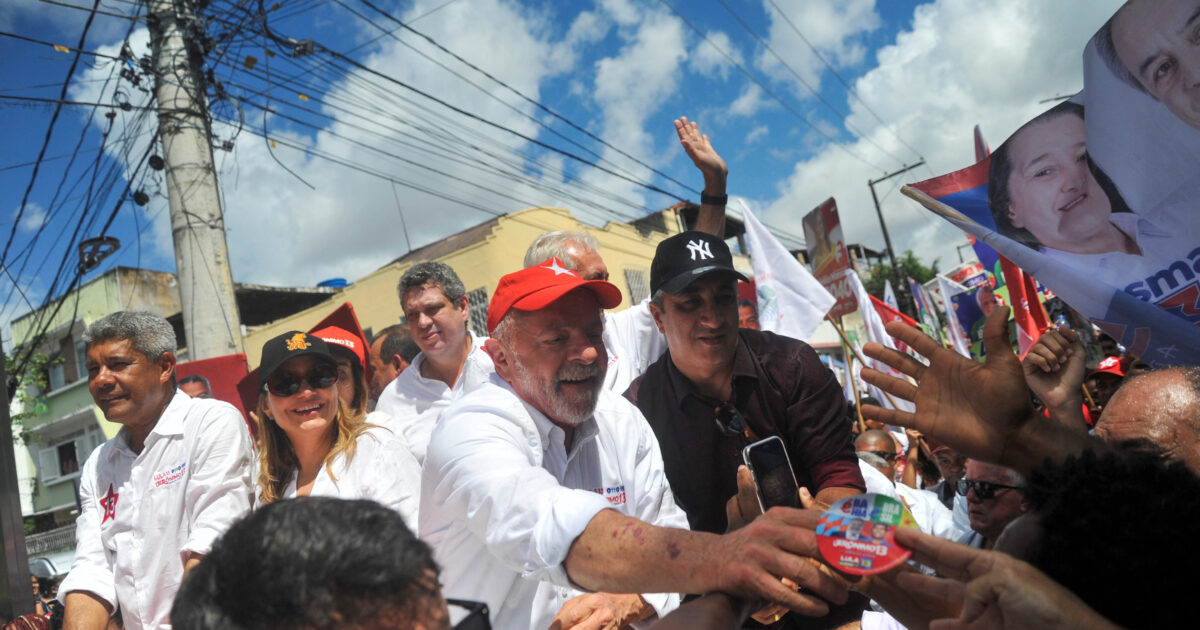 Election in Brazil: Standing with Lula is standing against poverty

Brazil is infamous for its wealth disparity. For many, it has become synonymous with city-sized slums like the favelas of Rio de Janeiro, their culture commodified in music and film, their survivalist nature hailed as ‘entrepreneurial” by the most cowardly neoliberal minds. But the misery in Brazil extends beyond the slums.

Outside my window in central São Paulo, a man covered in dirt and dressed in tattered clothes lies on the sidewalk. Commuters pass by him seemingly unfazed, some almost having to walk over his head early in the morning to get to and from the subway station. This is not an isolated case, poverty is everywhere in the financial capital of Brazil. In front of São Paulo Cathedral, thousands of destitute men and women gather around the public baths and soup kitchens. During the winter months, when temperatures drop to 8°C, volunteers distribute warm clothes from two large gazebos.

Over the past four years, this tragic reality has worsened with a 33 million people – or 15.5% of the population – are hungry every day. The figures come from a network of renowned Brazilian and international NGOs, including Oxfam. Yet the Jair Bolsonaro administration says such numbers are impossible and that the most vulnerable are already being helped by government benefit schemes.

After years on the UN’s hunger map – which tracks countries where more than 2.5% of the population lacks food – the country was finally removed from the list in 2014, having reduced by 82% the number of people suffering from food insecurity. To thank the social investment policies implemented by the Workers’ Party (PT) during its nine years in power. In particular, the Zero Hunger program, introduced in 2003 under the first Lula da Silva government, has been seen internationally as an example of how to conduct a successful social campaign within the context of a broader and more comprehensive regime. state benefits and initiatives.

However, during the pandemic, Brazil is back on the hunger map, many blaming Bolsonaro’s mishandling of the crisis. Jhe problem is now so glaring that in Thursday’s final presidential debate, it was not the left but center-right leading candidate Simone Tebet who confronted Bolsonaro over his failure to tackle poverty and hunger. “Let’s talk about Brazil, let’s talk about the real problems, let’s talk about hunger, which your Excellency, as president, says is non-existent,” said the candidate of the Brazilian Democratic Movement (MDB). “You don’t know the reality of Brazil,” she added, “like walking around big city centers and seeing kids at red lights being hungry and begging for a plate of food.”

Centrão: A broad front against Bolsonarismo.

If Bolsonaro is dethroned in these elections – making him the first Brazilian president not to be re-elected – it will largely be because of a backlash from the political center, known locally as center. This group of amorphous politicians, always anxious to be as close as possible to the executive power, seem to have judged Bolsonaro unsuitable. His attempt to appeal to members of Congress by allocating nearly 40 million reais (just under £7 million) from the federal budget to parliamentarians seemed too crude even for Brazilian politics. His inflammatory rhetoric, inciting violence and possibly armed insurrection, caused many in the centrão to back down, fearing the instability and unpredictability of the head of state.

It made the center look to Lula, although many considered the left’s public enemy number one until relatively recently. Lula’s list includes ten political parties, from the Communist Party of Brazil (PCdoB) to the Christian Democratic Party. Lula’s vice president, Geraldo Alckmin, backed the so-called “coup” that deposed Lula’s successor, Dilma Rousseff.

“No one can govern while being held hostage by Congress,” Lula said Friday during a press conference. When asked if he had the energy to lead such a politically divided coalition, Lula replied: “I’m 76 and I have a new wife, I’m madly in love. Why wouldn’t I have the energy to fix the center?”

For Lula’s far-left supporters, like members of the Peace and Socialism Party (PSOL), winning is only the first challenge. “Listen, we have two stages,” PSOL chief Guilherme Boulos told me. “The first step is the electoral process to beat Bolsonaro, the second step is, in the event of Lula’s victory, to ask where the government is heading.” When Lula is elected, Boulos assures me, there will be a “struggle over the leadership of the government, because in this broad democratic front, there are very different positions”.

Lula the communist against Lula the liberal.

Back in my temporary home, my hosts have friends over to watch the final debate. Over cigarettes and pumpkin soup, they discuss who their loved ones support – who has changed their minds and who will “vote Lula for the first time”.

We address the subject of how far a Lula government could really go. Lula’s first election twenty years ago was the result of a coalition of five parties, today there are twice as many. Someone suggests that the consensus between Lula and the center isn’t it surprising. Looking closer, when in power, Lula was a liberal politician with a history of economic conservatism mixed with progressive social policies. Under Lula, Brazil saw labor and pension reforms, but the PT never dared to propose major tax reforms or touch the country’s ultra-rich. When I ask how to explain this apparent contradiction in terms – Lula, the hated communist of the elites versus Lula, the liberal – one of my hosts says: “Brazil is such a screwed up country that even Lula’s politics turn out to be radical.

Lula’s political softness and Bolsonaro’s perversity are two sides of the same coin. The two faces of a rich nation where each social sector asks for a little more, whether it has nothing or already has a lot. The difference is that Lula lifted 20 million people out of poverty during his presidency, and Bolsonaro returned the exact same number during his. And on Sunday, voters will have to choose which legacy they want to support.