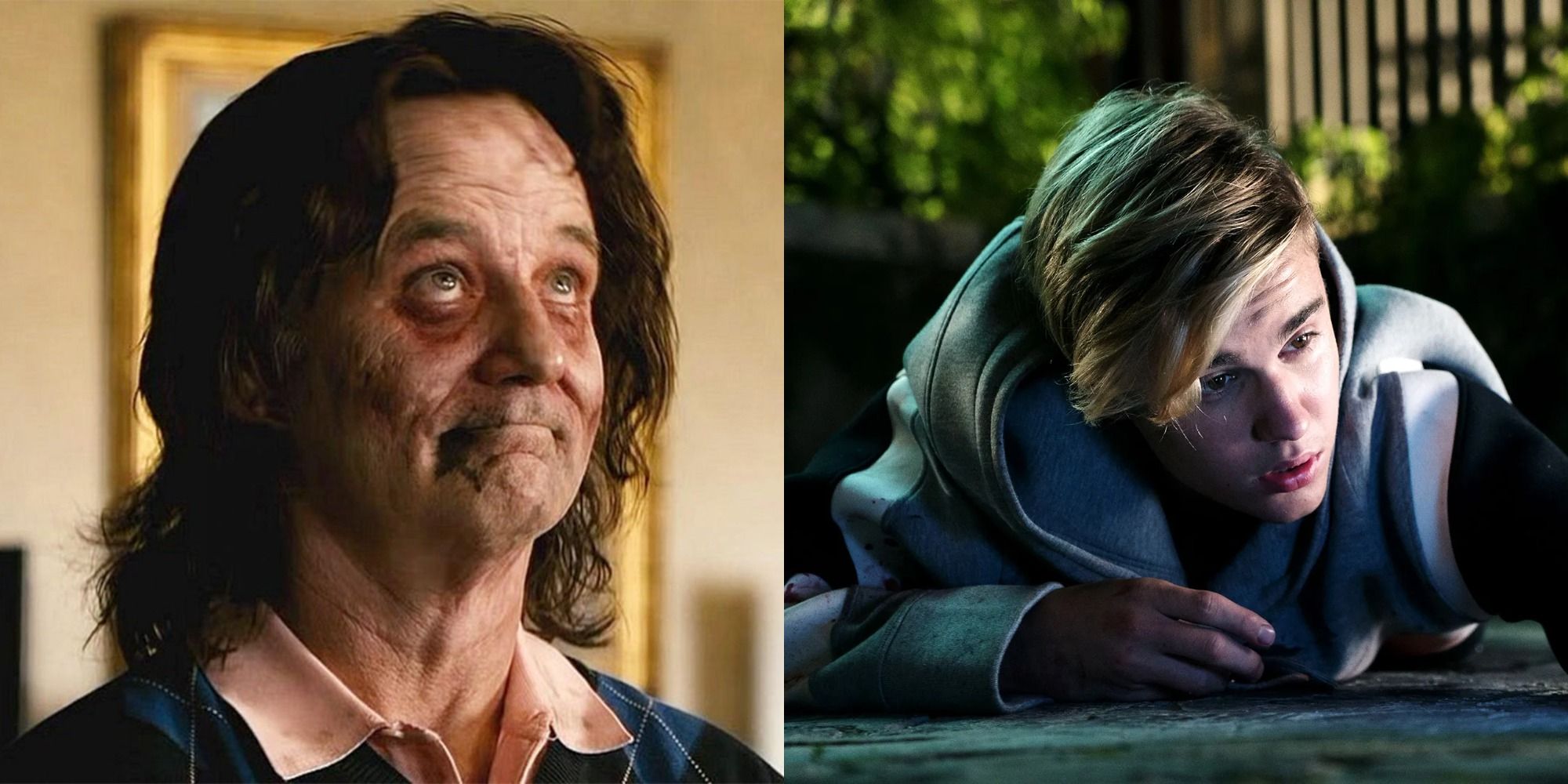 10 Most Hilarious Cameos In Movies Where They Die Immediately

Content Warning: This article may contain references to murder and violence

Death is always tragic…until it isn’t. Most often shown through parody media, hilarious deaths are graphic and usually occur without warning. An extreme example of this is some of the many deaths in Monty Python and the Holy Grail. The Knights flying off the Bridge of Death, attacked by the Caerbannog Rabbit, and the Dark Knight’s multiple decapitations cause laughable bloodshed.

What makes movie deaths even funnier is if an actor makes an unexpected appearance and then dies just as quickly. Usually used only to shock or to break the tension of a very serious moment, there’s rarely a moment when anyone expects to see a random celebrity get gruesomely killed off. Whether the death is accidental or intentional, it’s hard to feel bad for the victims while laughing at their demise.

What makes this death fun isn’t the characters themselves, but the story behind the people who play them. In Charlie’s Angels: full throttle, Willis plays a Justice Department official, who ends up ambushed and shot by an assassin who turns out to be former Angel Madison Lee (Demi Moore).

Willis and Moore married in 1987 and then divorced in 2000. Their divorce was amicable, and they’ve remained good friends ever since (so it’s kind of ironic that his character kills his so coldly). Either way, knowing the history between these two is enough to make Willis’ death a laugh.

Jackie Chan in Enter the Dragon

In a kind of blink-and-you-miss-it cameo, Chan plays an evil minion who attacks Bruce Lee’s character from behind. Lee is able to quickly push Chan back and hold him in front by twisting his arm behind his back and grabbing a fistful of hair. He then snaps Chan’s neck slightly off-screen and throws his body unceremoniously, already concentrating on another fight.

What makes this funny isn’t the death itself, but the facial expressions Lee makes while committing the murder. The camera zooms in on the chaotic look in his eyes and the exaggerated expression brings a certain hilarity to Chan’s sudden disappearance.

Appearing as tough-as-nails SWAT officer Rick Smith, Johnson arrives at a crime scene and delivers a speech on the difference between bravery and courage. He gets into his speech so much that he doesn’t notice when he pulls a grenade out of his belt and pulls the pin. Passers-by point to the live grenade in his hand, then he drops it unceremoniously.

Trying to pick it up, Johnson continues to push it away, soon following it into a hazmat tent. An explosion and a splatter of blood later, his character is gone. After all that serious/security buildup and he dies from being too laid back with a disposable weapon. It’s so silly, it’s funny.

Ryan Reynolds in A Million Ways to Die Out West

Known for being a naturally funny guy both on and off screen, Reynolds has been making people laugh for many years now. His appearance in this satirical film was as unexpected as his death. Breaking into a saloon, Liam Neeson’s character Clinch is on the hunt for a man who dared to have a relationship with his wife Anna (Charlize Theron).

Neeson eventually points his gun at a random man who turns out to be Reynolds. He is suddenly shot in the chest after failing to deliver the answer Neeson was looking for. The suddenness of the shot adds humor to the death because it was a blink scenario and they were gone.

A mysterious assassin kills “the most beautiful people in the world” in this equally wacky sequel to Zoolander, and Bieber seems to be on their hit list. After being chased down an alley by the assassin, Bieber finds himself cornered and looking down the barrel of a gun. In what can only be described as extreme overkill, the assassin riddles his body with bullets for what feels like a full minute, if not longer. Not only is the murder exaggerated, but Bieber’s face during this sequence seemingly and hilariously switches between pain and boredom.

Related: The 10 Most Shocking Character Deaths In Horror Movies

Eventually, Bieber collapses to the ground and the assassin disappears into the night. In reality, he should be very dead by now, but somehow he’s just got enough strength to pull out his phone, take a selfie, choose which filter to use, and then share it on social media before to finally pass. The whole thing was just ridiculous from start to finish.

An unexpected but hilarious cameo all the same, Anna Faris plays an exaggerated version of herself who meets Rell (Jordan Peele) and gang member Hi-C (Tiffany Haddish). As the night wears on, Faris’ behavior becomes increasingly erratic, and she dares Haddish to shoot Peele (even offering him $10,000).

However, Haddish hits her on the nose with her gun, causing her to fall and break her glass table. Faris then attempts to attack Haddish with a samurai sword, only to be attacked by Peele and then shot multiple times by Haddish. It would have been pretty scary if Faris hadn’t referred to Haddish’s character as a “peasant,” while charging her with the blade.

Although he is best known for directing the original Spider Man trilogy with Tobey Maguire, Raimi has indeed appeared in front of the camera on numerous occasions. In this particular movie, he plays a detective-like character.

After a bomb explodes in a store, someone starts shooting at them with a machine gun, causing panic. Raimi, armed only with two pistols, tries to fight back but is quickly overpowered. As he is filled with lead, his body twitches all over as his pistols fire wildly. It looks like suddenly acquired ragdoll physics for a few seconds. It’s a hilarious moment in an otherwise violent exchange.

During the third spy on kids movie, the kids and others fight their way through a video game and eventually get to the boss level. Until then, Juni Cortez, played by a young Daryl Sabara, has been set up to be “The Guy”, a legendary player who can supposedly beat level five. Then, out of nowhere, Wood shows up pretending to be the real “guy” and confidently enters the unbeatable level.

He is immediately struck by lightning from a trap and loses his 99 lives. He has time to mumble a surprised “oops” before exploding out of the game. As far as sudden deaths go, this one is pretty tame, but no less funny. Wood made a big fuss about being “The Guy” and then disintegrated in seconds.

In order to survive the zombie apocalypse, Murray decided to look and act like one of the walking dead. He’s been living like this for a while when Tallahassee (Woody Harrelson), Columbus (Jesse Eisenberg), Wichita (Emma Stone) and Little Rock (Abigail Breslin) arrive at his mansion. For some reason, Harrelson and Stone thought it would be fun to prank Eisenberg and Breslin by having Murray pretend to be a zombie and stagger behind them. Naturally, Eisenberg panics and shoots Murray in the chest.

Murray, to his credit, doesn’t come out without a few comedic jokes. When asked if he had any regrets, he replied, “Garfield, maybe,” with everyone knowing he hated voicing the live-action version of the lasagna-loving fat cat. Adding to the comedy of the situation, the others unceremoniously threw Murray’s body into a large trash can. If another actor had played this role, chances are it wouldn’t have been so funny.

This is, by far, the most random and absurd cameo ever seen in a movie. Deadpool and his X-Force team jump out of a plane on a mission and some don’t even make it to the ground as they end up gruesomely dying. In Pitt’s case, his character, called the Vanisher, was invisible until he flew into power lines and died to death.

A two-second appearance and all Pitt asked for payment was a cup of coffee (via Hollywood Reporter). The whole situation was hilarious from start to finish, not to mention completely unexpected. Sometimes the funniest deaths are often the most surprising, and since people are still talking about it, it certainly had a huge impact.

Next: Ranking Every Villain In The Deadpool Movies

25-year-old aspiring author who loves all kinds of media. I’m currently trying to get into the game industry and hope to write for a pixel art game one day. I love cats, coffee and robots. Fiction is the personal medium of choice.